What is A Traditional Christmas Dinner? 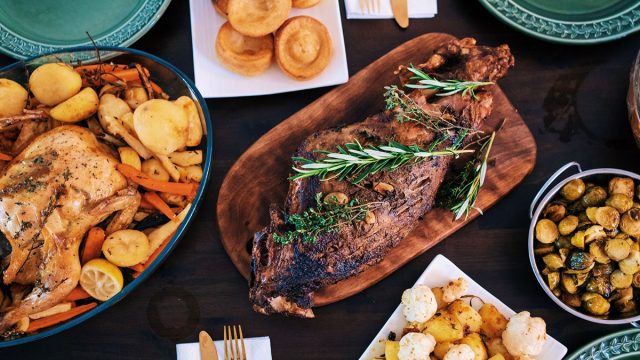 The time to enjoy traditional Christmas dinner is just around the corner.

But what should traditional Christmas dinner really contain? This depends on the region.

British and Scandinavian traditions largely influenced Christmas dinner customs in the US.

As a result, we’ve adopted the glazed ham, turkey and stuffing, gingerbread, and eggnog.

Over time, these dishes were tailored to our preferences and cultural specifics and have been established across all states.

But people in different US regions have also invented their own Christmas dinner traditions.

If you go on a winter trip across the states, you’ll try numerous unique, delicious foods. Gumbo in Louisiana, rib roast in Maine, and crab cakes in Maryland are only a few examples.

Of course, Christmas dinner foods in some regions are very different from American. These differences are determined by cultural aspects, ingredient availability, or taste preferences.

For instance, people eat Yuka fried instead of mashed potatoes and casserole in neighboring South America instead of ham.

Some Christmas dinner traditions may seem odd to us. The Japanese custom of eating KFC or Russian jellied meat are perfect examples of how diverse cultures are, each beautiful in its own way.

America’s most popular Christmas dinner option was allegedly brought here from Britain. Written records date to as far as the early 19th century.

However, historians believe that the dish originated long before that – even Ancient Romans were avid bird stuffing.

The recipe for this traditional Christmas meal is relatively simple. The preparation takes about 30 minutes, though the cooking itself lasts for over four hours.

The ingredients are mixed with fried or sautéed onion and celery and placed inside the turkey cavity. The bird is then rubbed with oil and cooked until it becomes golden brown.

Despite the popularity of turkey and stuffing, the United States Department of Agriculture insists stuffing should be cooked separately from the poultry.

That’s because bacteria survive in temperatures under 165 degrees Fahrenheit, and stuffing cooked inside of the bird often doesn’t reach the required temperature.

Ham and mashed potatoes share the palm of victory for the nation’s favorite Christmas dinner with turkey. Furthermore, this dish is just as popular outside of the US, especially in Scandinavia and Britain.

The variety of Christmas ham recipes is endless. You can make ham in root beer, orange and coriander, honey glaze, or simply cook it with cloves.

Such ham tastes delicious both as a main course during dinner and on top of rye bread for breakfast.

To make Christmas ham with cloves in honey glaze, you’ll need to first score ham in a diagonal pattern.

Then, repeat the same action in the opposite direction and put cloves into the crossings. Next, preheat your oven to 325 degrees Fahrenheit and bake the ham for about 30 minutes.

Then, mix dark corn syrup, mustard, orange juice, and honey in a bowl. Remove ham from the oven and cover it in the glaze. Put it back and let it cook for another 30 minutes.

While turkey and ham are traditional Christmas foods, pudding is even more than that. It’s a Christmas symbol, widely used on postcards, textiles, and various decorations.

Christmas pudding tradition originated in Britain but has since been established in numerous other regions, including the US.

You can come across several kinds of Christmas pudding, the most common being plum, fig, and raisin. However, plum puddings aren’t typically made with plums but rather with a mix of dried fruits.

Christmas pudding is traditionally served with a hard sauce made with butter, sugar, cream, vanilla, and egg yolk.

To make Christmas pudding, first, mix butter and brown sugar until the mixture is smooth. Then, add dried fruits of your choice, egg, flour, and baking soda.

Pour the mixture into a pudding bowl and cover the top with parchment or muslin. Finally, steam your pudding for about three hours.

The best thing about Christmas pudding isn’t even its delicious taste but rather its long life. You can keep your pudding in the fridge for about a year if it’s prepared right.

What time of the year could be better to enjoy eggnog than Christmas? This British drink is commonly called milk punch or egg milk punch and can be either alcoholic or non-alcoholic.

Eggnog is made from milk, cream, sugar, whipped cream, eggs, cloves, and nutmeg. The alcoholic version can be prepared with different beverages, such as bourbon, liquors, and brandy.

The original eggnog recipe and name etymology are widely debated. Oxford English Dictionary states that “nog” is a type of strong beer brewed in Eastern England.

However, the word “eggnog” may also come from “noggin,” a wooden mug used to serve alcohol.

If you talk to people from other countries about Christmas food, they may not know about eggnog or turkey and stuffing. But nearly everyone across the US, Europe, and Russia have heard of gingerbread.

The history of gingerbread can be traced back to Ancient Egypt, where it was used in ceremonies.

The recipe arrived in Europe with Crusaders in the 11th century, and when spices became more affordable, the recipe has stuck with the masses.

Of course, the spices and sugar must be mixed with flour and egg base; otherwise, it would be just a dry spice mixture.

Gingerbread cookies can take different forms. Here in the US, we’re used to the thin cookies of various shapes, often covered with sugar glaze or ornaments.

But you can also come across a darker, thicker, sphere-shaped variety such as Polish pryaniki.

The Differences Between States

While the basic list of traditional Christmas dishes is consistent throughout the states, every region also has unique customs.

For instance, the traditional Christmas dish in Alaska is prime rib, in Arkansas – pecan pie, and in Hawaii – Kalua pork.

Cranberry sauce is beloved in multiple states, including Massachusetts and Florida. Another typical dish is a casserole, though the ingredients vary.

So, in Georgia, people prefer casserole with green beans, whereas in Indiana with sweet potato.

Nordic people share the American passion for eggnog, glazed ham, gingerbread, and Christmas pudding. However, some Scandinavian recipes are unique and worth trying out.

There’s never too much herring – it’s commonly pickled in mustard or red onion marinade and served on crispbread or with boiled potatoes.

Scandinavians typically have a separate small table for dates, figs, and nuts. Thus, they can be consumed throughout all twelve days of Christmas.

Traditional Christmas dinner in Western Europe usually includes the same meals as in the US, with various additions depending on the country.

Ireland’s Christmas dinner is no different from American, though turkey is often replaced with goose.

A popular Christmas side dish in Germany and Netherlands is red cabbage. It’s usually consumed with hot spiced wine. For dessert, Germans eat marzipan bread with spices and dried fruits.

Christmas dinner in Eastern Europe is nothing like it in America. Perhaps, the only similarity is mashed potatoes.

The most famous salad is Olivier, consisting of boiled potatoes and carrots, pickled or fresh cucumbers, eggs, cooked meat, peas, and mayo. Eastern European appetizers include sandwiches with caviar and deviled eggs.

Another popular Eastern European Christmas dish is holodets, which is essentially cold, cooked meat in jelly. Some people also add veggies into their holodets.

If Eastern European people make any hot dishes for Christmas, it’s typically cutlets from beef or fish. But these are just as common on regular days and can’t be considered traditional Christmas food.

Some Christmas traditions in Asia are genuinely eccentric. For example, if you come for Christmas to Japan, you won’t be offered Christmas pudding or gingerbread.

Instead, Japanese people eat Kentucky Fried Chicken. So why not order some KFC and relax on this merry day instead of spending hours at the oven?

In the Philippines, the Christmas celebration is similar to ours, but turkey is replaced with a whole pig.

Carolyn Morrow
Recommended Articles
Why Do We Say Merry Christmas? (And Not Happy Christmas)What Are The Colors of Christmas?
Hello, I'm Carolyn