When Do We Celebrate Christmas? 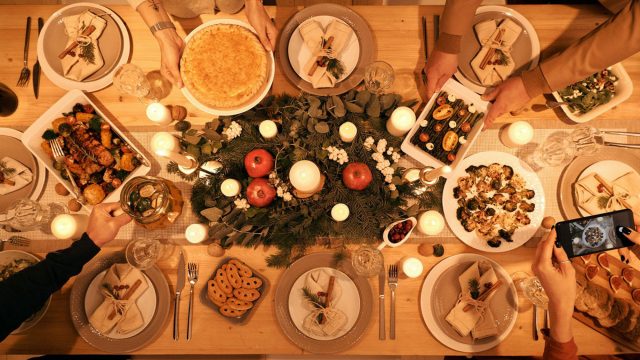 Everyone knows the date of the Christmas celebration is December 25th. But it isn’t the only remarkable day of the holiday season.

Christians around the globe celebrate numerous other dates commemorating Christ, special moments in his story, and saints.

The holiday season starts on the first Sunday of Advent, at the end of November or the start of December, and ends with Candlemas on February 2nd.

So, the Christmas period lasts for over two months rather than for two days like many people think.

Some Christmas dates aren’t widely observed in the US, though they have a significant religious significance.

For instance, Epiphany is dedicated to the memory of Wise Men who prevented Jesus’ death from King Herod’s hand.

In addition, each of the Twelve Days of Christmas pays tribute to a significant occurrence or a saint.

While we know when Christmas Eve and Christmas Day are celebrated, not many know how the dates were chosen. Furthermore, the date of the Christmas celebration isn’t the same in all countries.

It’s no surprise that people nowadays often aren’t familiar with all important dates of the Christmas period, as the focus of this holiday shifts further from religion and closer to commercialism.

However, learning them is a great way to extend the holiday season and remember the real meaning of Christmas.

This period marks Mary and Joseph’s journey from Nazareth to Bethlehem and Jesus’ birth. It’s also the start of the liturgical year for Western Christians.

The word “Advent” is derived from Latin “adventus,” which translates as “coming.” That’s because Advent focuses on the arrival of Christ to our world, and not solely the moment he was born.

Advent also marks the Second Coming of Christ. In other words, this season celebrates both the physical arrival of Christ and his reception in the souls of Christians.

Advent tradition started in the fifth century. Indeed, the first historical evidence of Advent celebration dates to 480 when Bishop Perpetuus of Tours told people to fast every Sunday before Christmas, starting with November 11th.

The reason for such a date choice was Saint Martin’s Day.

Saint Martin was the third Bishop of Tours and is considered a patron of numerous people, including the poor, soldiers, tailors, and beggars. That’s why Advent is sometimes called Lent of Saint Martin.

Only 100 years later, in 581, Advent tradition was adopted by the Macon council and started spreading across all France. Then, slowly, the custom was also adopted in other European regions.

Only in the 13th century has the Advent period shortened. It now started on November 30th, Saint Andrew’s Day, and lasted for four weeks. So not only have the Advent dates changed, but the traditions did too.

Initially, people starved on Sundays during the Advent season, and some even chose to starve every day.

Each of Advent’s Sundays has a different meaning. And on each Sunday, Christians light up one of four candles placed in a special candleholder or an Advent wreath. Three out of four candles are purple.

In the liturgy, the purple color symbolizes penance and hope. One of the candles, which is lit up on the third day, represents the joy of soon Christ’s arrival.

Christmas Eve is the day preceding Christmas Day when Jesus was born. It’s celebrated on December 24th in the Catholic church but on January 6th in the Orthodox church.

The reason why people celebrate the eve of Jesus’ birth relates to the fact that traditionally, Christmas was a 12-day period rather than a single day. And many people treat it as such to this day.

One of the most notable Christmas Eve traditions is to light up the fifth Advent candle.

Unlike the four other candles, it’s neither purple nor pink but white, symbolizing purity. This candle represents Jesus and is called The Christ’s Candle.

People in some European regions also feast and exchange their gifts on Christmas Eve.

However, the reason for the early start of Jesus’ birth celebrations lies in the fact that Christian liturgical day starts at sunset. That’s why some churches ring bells and hold prayers in the evening.

Many Christians in Europe believe that Jesus was born at night and attend the Midnight Mass commemorating his birth. For this very reason, Germans call Christmas Eve Holy Night.

Christmas Day is the date when most of us celebrate Christmas. And, of course, everyone knows it’s the day when Jesus was born, so this seems logical. But why exactly was this day chosen as his birthday?

Fun fact – historians don’t know for sure whether Jesus was indeed born on December 25th.

That’s because the exact date of Jesus’ birth was never mentioned in the Bible. So instead, it was calculated based on the date of his conception.

The Bible presents conflicting evidence regarding Jesus’ birth date. For instance, shepherds surrounding him suggest that the story happens in spring.

Furthermore, some historians consider the choice of date to be Emperor Constantine’s attempt to replace paganism with Christianity.

Indeed, the Romans first celebrated Christmas on December 25th during his reign, so this theory makes sense.

Still, most historians agree with the calculation hypothesis introduced by Sextus Julius Africanus, who lived in 180-250 AD. He noticed that the Bible stated Jesus was conceived on Nisan 14 of the Jewish calendar.

This date translates to March 25th by Julian calendar. If we add nine months to this date, we get December 25th.

Some don’t agree with this date, though. Orthodox Christians who still follow the Gregorian calendar celebrate Jesus’ birth on January 7th.

On this day, people around the world gather with their families to feast and exchange gifts. Some also attend church services.

In 567, the Council of Tours, the same which invented the Advent tradition, proclaimed the festive period from Christmas to Epiphany. It lasts twelve days and is called the Twelve Days of Christmas.

Each of the twelve days celebrates a particular event or commemorates a saint. Obviously, Christmas Day is dedicated to the birth of Jesus.

December 27th commemorates Jong the Apostle, one of Christ’s twelve disciples and friends. December 28th is the Feast of the Holy Innocents.

On this day, people remember infant boys from Bethlehem killed by King Herod who was searching for Jesus and made his people slay every boy in the area.

December 29th is dedicated to Saint Thomas Becket, a Christian martyr from the 12th century who was an Archbishop in Canterbury.

He was killed for questioning the king’s authority over the church. December 30th commemorates Saint Egwin of Worcester, the protector of orphans and widows.

December 31st is known as New Year’s Eve. But it’s also dedicated to the memory of Pope Sylvester I, who was one of the first Bishops in Rome.

January 1st, in turn, is not only New Year’s Day. It also celebrates the memory of Mary, Jesus’ mother.

January 2nd commemorates two Christian saints, Saint Basil the Great and Saint Gregory Nazianzen. January 3rd marks the Feast of the Holy Name of Jesus. On this day, Christ was officially named in the Jewish Temple.

January 4th nowadays is dedicated to Saint Elisabeth Ann Seton. She was the first American saint.

January 5th celebrates the memory of another American saint, Saint John Neumann, who was a Bishop. This day is also called the Epiphany Eve.

Epiphany is celebrated on January 6th in the Catholic church and January 19th in Orthodox Church. This day isn’t as widely observed in the US, but it’s considered just as important as Christmas Day in some regions.

Epiphany commemorates the Wise Men or The Three Kings who visited infant Jesus after his birth. The story narrates that the Wise Men came to Bethlehem from the east.

At that time, Judea was ruled by King Herod.

When the Wise Men came to Jerusalem asking, “Where is he who is born King of the Jews? For we saw his star in the east and have come to worship him,” the king was troubled and has asked his men to find the Messiah so that he could also worship him.

The Wise Men found Jesus and brought him gifts: gold, frankincense, and myrrh. They then saw a dream warning that they should not disclose Messiah’s location to Herod.

So, the Wise Men took a different route home, but King Herod made his men kill every baby boy in Bethlehem. So, Epiphany celebrates the wisdom and dedication of the Wise Men.

Candlemas is known as the feast of the Holy Encounter or the Feast of the Presentation of Jesus Christ. As the name suggests, this day commemorates Jesus’ first presentation in the Jewish Temple.

Candlemas is celebrated on February 2nd. Candlemas is one of the oldest celebrations in the Christian church, dating to the fourth century AD.

Candlemas is celebrated differently across the globe. For example, in France, Belgium, and Switzerland, people eat crepes and light up all candles in the house.

That’s because the round shape and golden color of crepes resemble Sun, reminding of the soon arrival of spring.

In Luxembourg, children roam the streets with lanterns in their hands, singing songs. People in Puerto Rico carry statues of Virgen de la Candelaria on their shoulders.