The Complete History of Christingles 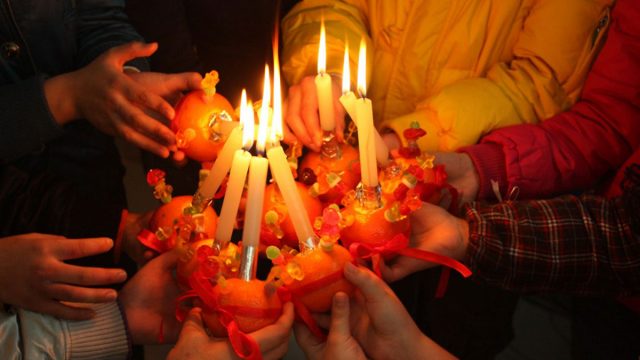 This jolly tradition may seem a bit childish at first, but it carries profound metaphor and practical importance.

The look of a Christingle, indeed, is playful and bright. But every part of this fruity construction has a special meaning.

Christingle symbolism combines our penance and Christ’s sacrifice with the joy of the Christmas celebration.

The tradition is much older than many people think, but it only became popular outside of its home church in the 20th century.

So while the custom isn’t yet widely observed in the US, it has all chances for success here.

Christingles became popular in the UK mainly because services dedicated to the tradition help raise funds for children.

You can make Christingles a family tradition or even host a public service at your church or school.

It’s an entertaining activity for the entire family that serves a vital purpose, following the core rule of Christianity – love your neighbor as yourself.

Christingles are symbolic objects used at Christmas, Epiphany, and Advent. The construction of Christingle features an orange or tangerine, candle, ribbon, and dried fruits or sweets.

The citrus fruit is wrapped with a red ribbon, and a candle is placed in its center. Four wooden sticks with fruits or sweets on them arranged around the candle point in different directions.

The origin of the word “Christingle” is uncertain. It may have been derived from German “Christkindl,” translating as Christ child.

However, Christkindl isn’t an infant Jesus but an angel-like gift-bringer in some European countries, including Germany and Switzerland.

Another version of the “Christingle” word origin is that it’s a blend of words “Christmas” and “ingle.” “Ingle” means fire in Old Scottish, so a Christingle may be a representation of Christmas light.

Christingles don’t have such an odd construction for aesthetic purposes – each of the parts has specific symbolism.

For example, an orange, or sometimes tangerine or grapefruit, is chosen for its color and shape. Its round shape represents the world, and orange color the sun.

Candles always had a deep significance in Christianity. They represent light and stars, like the Star of Bethlehem that guided Mary and Joseph on their way to Bethlehem.

So, the candle in Christingle symbolizes that God’s word guides us through the dark like a light of a candle or the star of Bethlehem.

The candle color also matters, just like in Advent tradition. So, violet or purple colors in liturgy symbolize penance and sacrifice.

Pink represents joy and festivity. But traditionally, the Christingle candle is white, symbolizing purity, glory, and Christ himself.

A white candle called The Christ’s Candle is sometimes lit up on Christmas Eve as part of the Advent season. The Christingle tradition can be perfectly incorporated into this practice.

The red ribbon tied around the orange represents Jesus’ blood that was shed when he made a sacrifice for our sins. Sometimes, a white ribbon is used instead to show his purity.

The four wooden sticks on their own don’t represent anything, but their placement matters.

They point in four different directions symbolizing the four seasons of nature and four parts of the world, North, South, East, and West.

The dried or fresh fruits or nuts on the sticks represent the gifts of God, who created our nature and granted us good harvests. Sometimes, fruits are replaced with sweets, and they can symbolize gifts altogether.

Christingles may seem like a contemporary invention at first, but their history stems from the 18th century.

Numerous modern Christmas traditions were invented and popularized at that time, including decorating Christmas trees and portraying Santa in a red suit.

In 1747, the minister of Moravian Church in Germany, John de Watteville, came up with the idea of gifting children attending church service a white candle wrapped with a red ribbon.

Moravian Church is one of the oldest Protestant churches in Christianity, originating in the 15th century in Bohemia.

John de Wateville wanted to show the happiness Jesus brought to people with simple symbols. So, the candle represented Jesus as the light of the world, and the ribbon symbolized his sacrifice.

This wasn’t yet the construction with orange and fruits, but the idea was born. In Moravian Church, the Christingle service is held on Christmas Eve.

The custom traveled the world with the Moravian Church and arrived in England in the late 18th century.

We don’t know for sure when a candle with ribbon wrapped around it became an orange with wood picks sticking out of it.

However, most historians agree that the Church of England may be accountable for Christingle’s modern look and name.

Christingles in the UK

Moravian Church traveled to numerous European regions, but the tradition was especially welcomed in England. But it wasn’t widely observed until the late 20th century.

In 1968, The Children’s Society, together with the Church of England, held the first Christingle service in the UK.

The Children’s Society is one of the UK’s first and most prominent charitable organizations helping children. Although some services have been reportedly held earlier, they weren’t nearly as significant.

The idea of popularizing Christingle tradition in the UK came from John Pensom, who’s now known as Mr. Christingle among British kids.

At first, people were skeptical about the complicity of Christingle construction.

But the practice has shown they were wrong. Kids easily managed to make a Christingle, and the custom has quickly gained popularity, becoming the kid’s favorite church service in the UK.

Fun fact – there’s a similar tradition in Wales that dates to Middle Ages. It’s even older than the Christingle tradition!

Kids used to go caroling on New Year’s Day, wishing people on their way good luck and collecting money or treats. During the process, they would carry a Calennig apple.

The Calennig apple was standing on a tripod from wooden picks and featured nuts, cloves, and fruits as decoration.

Despite a similar look, the Calennig apple and Christingles aren’t related and have different symbolism. “Calennig” means “the first day of the month” and simply represents the start of a year rather than Christ.

Are Christingles a Thing in the US?

Christingle services aren’t as popular in the US as they are in the UK. People familiar with the tradition make Christingles at home with their kids, though the activity rarely becomes public.

However, Christingles are relatively common on Christmas markets, when children sell the Christingles they made for charity purposes.

Still, a Christingle service is a great way to show children that a church service can be exciting, too, and raise some funds for those in need.

Anyone can offer their church to host such a service and help the tradition spread. After all, there are never too many celebrations.

There is no defined ritual related to Christingles. In the UK, children light up their candles and sing songs or read prayers.

Then, following the initial tradition, they raise money for other kids or other people in need. So, any church is free to choose how to host their Christingle service.

How to Make a Christingle

Making a Christingle is fun and straightforward. It’s a great Christmas activity for the entire family.

All you need to participate is an orange or a similar fruit, four wooden picks, a ribbon, foil, some pins, a pencil or pen, a candle, and dried fruits, nuts, or sweets of your choice.

Start by washing the orange carefully. This step is necessary solely for health and safety purposes; no symbolism here!

Then, take a pencil or a hollow pen tube and push it into the top of the orange to make a hole for a candle.

Thread the wooden picks with dried fruits, nuts, or sweets. The more goodies on each stick, the better. Once done, push the sticks into the orange from four sides, pointing slightly upwards.

Take a piece of foil and wrap it around the candle at the bottom.

Again, no symbolism is intended; the foil has a functional purpose of holding the candle in place and protecting the orange from falling wax. Place the candle into the prepared hole.

Tie a ribbon around the orange. You can either make a bow, fix the end with fabric glue, or use small pins. Congratulations, the Christingle is now done!

Ensure the construction stands firmly on the surface before lighting it, as oranges are round and may roll.

If you aren’t going to keep the Christingle in your hands, you can cut off a small slice at the bottom of the orange to make it flat.

A great thing about Christingles is how easily you can ingrain more symbols that matter personally for you into the construction.

For example, by changing the color of the candle, you can showcase what Christmas means for you in the first place – penance, joy, or hope.

The choice of fruits can also carry specific symbolism. For instance, apples represent knowledge or the fall of a man from sin, while oranges good fortune and sun.