The Complete History of Christmas Pudding 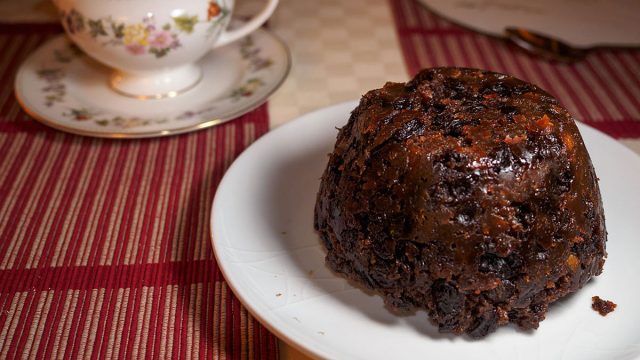 The custom of eating plum pudding for Christmas is observed in the UK, the Americas, Canada, Australia, New Zealand, Africa, the Caribbean, Central Europe, and Eastern Europe.

But why do we eat specifically this meal to celebrate Jesus’ birth?

The truth is, Christmas pudding has no religious context. Some symbolism was incorporated into the tradition centuries after it appeared.

But initially, Christmas pudding was eaten solely because it was rich enough to keep people full during the pre-Christmas fast.

That’s right, at first, Christmas pudding was consumed during Lent rather than on Christmas Eve. Furthermore, the meal has only acquired its name in the Victorian Era. Before that, it was simply called “plum pudding” or “figgy pudding.”

Over time, plum pudding became tightly associated with Christmas and was linked to new customs, some of which are observed to this day.

For instance, some American and British grocery stores place an edible coin into their puddings, paying tribute to a Victorian Era tradition, and many restaurants flame the pudding when serving it.

Like most ancient recipes, Christmas pudding has undergone endless adjustments.

While the main ingredients and the dish concept remain unchanged, you can find numerous Christmas fruitcake variations today. In addition, every region has included a piece of the local culture into this fruity dessert.

Christmas pudding originated not as a dessert but rather as a porridge known as frumenty. Its first records date to the 14th century.

The meal was made from hurled wheat boiled in milk, with cinnamon, saffron, and, often, raisins, currants, prunes, mutton, or beef.

Frumenty was first seen as a fasting meal eaten before Christmas festivities rather than a Christmas dessert, as it was very filling.

But in the 16th century, the British started adding eggs, breadcrumbs, dried fruit, and spirits into frumenty to thicken it, slowly turning it into fruit pudding.

Initially, the pudding was boiled in a cloth, as modern steamers didn’t exist. Even today, some people prefer the old ways instead of steaming the pudding in a bowl.

But pudding didn’t become associated with Christmas Eve festivities until the 17th century.

Only in the 1650s did the meal become a widely observed Christmas tradition in the UK. And in the 1660s, Puritans banned Christmas pudding and numerous other Christmas customs as a desacralizing thing.

Puritans considered Christmas wasteful as people used to eat and drink a lot during the holidays. Christmas should have been spent in contemplation but not feasting.

Soldiers roamed the streets, confiscating any food they thought could be related to Christmas celebrations, including puddings.

With the arrival of the Georgian Era, Christmas celebrations were resurrected by King George I. People started cooking bird pies, roast beef, and Christmas pudding again.

Many modern Christmas traditions were solidified during the Victorian Era. In the 1830s, the look of the dried fruit pudding became more definite, acquiring a rounded shape and sugar paste topping.

In fact, the meal was first called Christmas pudding in 1845 by Eliza Acton, who was one of Britain’s best-known food authors, in her book Modern Cookery for Private Families.

Puddings were often cooked in unusual molds. Historians even found records of Christmas puddings made in the shape of towers and castles.

During the same period, people started hiding silver coins in their puddings. Whoever finds it was believed to get good luck for the upcoming year.

This custom resembles the tradition of hiding a Jesus’ figure in a King’s Cake on Epiphany. However, Christmas pudding didn’t influence the appearance of the King’s Cake – it was the other way around.

The tradition can be traced to the 13th century when British housewives used to hide a dried bean in their Twelfth Night Cake.

In 1843, Christmas pudding was mentioned in Dickens’ famous Christmas Carol. The author has dedicated two whole verses to this Christmas meal. One of them narrates:

“In half a minute, Mrs. Cratchit entered – flushed, but smiling proudly – with the pudding, like a speckled cannonball, so hard and firm, blazing in half a quarter of ignited brandy, and bedight with Christmas Holly stuck into the top. Oh, what a wonderful pudding!”

While the Christmas pudding was still often called plum pudding, people in the Victorian Era didn’t usually use plums in the recipe.

This is because they weren’t widely available at that time and were substituted with raisins and other dried fruits.

How Christmas Pudding Made It to the US

Christmas pudding has made it into the US during the colonization era in the 17th-18th centuries, like many other British traditions. At the same time, the custom has spread into Australia and South Africa.

One of the first records of Christmas pudding in American cookery books dates to 1742. It was titled The Williamsburg Art of Cookery by Helen Bullock mentioned a Christmas pudding recipe featuring brandy and candied peel.

However, depending on the region, the ingredients used in Christmas pudding may differ drastically.

So, in Scotland, a popular Christmas cake is called whiskey Dundee. Unsurprisingly, it featured whiskey, almond, and a combination of dried fruits, currants, and raisins, like the traditional Christmas pudding.

The recipe dates to the 16th century and was likely initially created for Queen Mary of Scots.

Germans also prefer to eat fruitcakes for Christmas, though with some adjustments. The German Christmas fruitcake version is called Stollen. It was first baked in 1545. It’s cooked with nuts, dried fruits, and marzipan.

Italians, in turn, eat Panettone, a fruitcake version made with sourdough bread and featuring a cylindrical shape.

It features spices, notably saffron, like original British Christmas puddings, which give the dough yellowish color, raisins, and dried fruits.

In Eastern Europe, the Christmas pudding recipe is nearly identical to the British one, but the shape is different. Christmas fruitcakes usually have a hole in the center and are covered in sugar powder.

In Southern America, Christmas pudding carries a tropical vibe traditional for this region.

So, in Brazilian pudding, called Bolo de Natal, refined sugar is replaced with cane sugar. The surface of the pudding is usually covered with fresh fruits. In Colombia, Christmas pudding is made with rum.

Some Christmas pudding variations replace traditional brandy or wine with stout or porter; others don’t feature alcohol at all and involve citrus juice instead.

Today, the desert can be served cold or warm, but nearly always with a hard sauce made with butter or cream, ice cream, custard, or bechamel.

In the 1930s, during the Great Depression, the Christmas pudding recipe involved cold tea instead of brandy for flavoring. No eggs were used, so the texture wasn’t as thick and more resembled frumenty.

Modern Christmas pudding recipes may have very little in common with the traditional version.

American puddings are often decorated with candied cherries or pineapples or are made with chocolate. Gluten-free and vegan versions gain popularity every year.

Hiding a coin inside the pudding isn’t the only tradition associated with this Christmas meal. Sometimes, the coin was replaced with a button, and if a single man found it, he would stay single for the entire year.

A similar belief existed concerning single women, where instead of a button, the pudding contained a thimble.

On the opposite, some people used to hide a ring inside the pudding. One who finds it was likely to get married the following year or become rich.

However, these customs were mainly observed for entertainment and didn’t hold religious significance.

Today, many prefer to substitute buttons and rings with food-safe items, such as chocolate coins. That’s smart, as no one wants to cause an emergency on Christmas Day!

During the Victorian Era, people observed the stir-up-Sunday tradition on the last Sunday before Advent. From children to elders, everyone in the household got to stir the pudding mixture and make a wish while doing it.

The name of the custom stems from the British Book of Common Prayer. The collect for the last Sunday before Advent started with words, “Stir up, we beseech thee, O Lord, the wills of thy faithful people.”

So, traditionally, Christmas pudding was made over a month in advance to allow it to season properly.

Such a long cooking time is no wonder, as the desert preserves naturally due to added dried fruits, spice, and spirits. As a result, the shelf life of Christmas pudding exceeds a year when prepared correctly.

To this day, a widely observed custom is flaming the Christmas pudding. The process is meant to symbolize the Passion of Christ. When served, spirit, usually brandy or whiskey, is poured over the pudding and set on fire.

Another commonly accepted to this day tradition is cooking Christmas pudding with 13 ingredients representing Jesus and the twelve apostles.