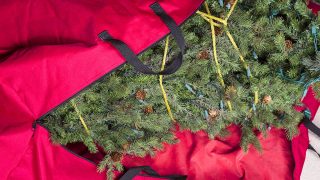 The Complete History of Christmas Trees The Christmas tree history is a bumpy ride.

Today, you may feel that the tradition of setting up an evergreen, richly decorated tree was around forever.

But the first mention of a Christmas tree dates not that long back.

Even before people agreed on making a fir tree the Christmas symbol, other evergreen plants served the same purpose. Pagans associated them with everlasting life and believed they protected homes from witches and ghosts.

Two out of three Baltic states claim to be the motherlands of the Christmas symbol. Indeed, they were among the first to set up a Christmas tree on display, but historians argue they weren’t the pioneers.

The truth is, Christmas trees originated in Germany nearly two centuries before they appeared in the Baltics. But the custom was slow to spread until German prince Albert has married the Queen Victoria of England.

America was the latest to adopt the tradition. However, the US has presented the world with some of the most beautiful Christmas trees ever set up.

Today, artificial trees are rapidly replacing real ones. Let’s hope the fantastic smell of fresh fir in our homes won’t fade away entirely with technological development.

Was It Always a Christmas Tree?

Long before Christmas trees became a tradition here in America, other plants were used to symbolize the soon arrival of spring.

Evergreen plants such as holly, spruce, and ivy were believed to protect homes from evil spirits and thus were a common doorway decoration in Medieval times.

Even Odin’s and Father Christmas’ attires were typically portrayed green, repeating the color of evergreen plants.

These figures used to be Christmas Spirit representations in Scandinavia and Britain instead of Santa Claus. Vikings associated evergreen plants with the God of sun, Balder.

Not only Norse pagans used to fill their homes with evergreen boroughs. Ancient Romans also paid tribute to the upcoming spring during winter solstice festivals.

In ancient Egypt, holly and spruce were far from common. But winter solstice traditions are similar regardless of how far Egypt is located from the US or Scandinavia. Egyptians worshipped a hawk-headed God of Sun Ra.

During winter, when the sun didn’t shine as bright, Ra was considered to be ill. Egyptians decorated their homes with green palm rushes as a symbol of life that was finally winning the annual battle against death.

The image of a modern Christmas tree decorated with colorful balls was likely borrowed from The Paradise Tree. However, it isn’t the name of a plant but rather of a medieval Western German mystery play about Adam and Eve.

Up until the 12th century, Europeans didn’t have a definite evergreen plant used to decorate homes during the winter solstice.

But everything changed with the introduction of The Paradise Tree, depicting the legend of humanity’s creation.

You likely know the story of Adam and Eve’s sin and banishment from Paradise. But even though Eve ate an apple, it didn’t grow on a regular apple tree.

Instead, it grew on a large, evergreen fir tree. The connection of a Christmas tree with Paradise makes perfect sense, as the celebration itself has Biblical origins.

The image of a fir tree with branches covered in red apples resembles a modern Christmas tree, indeed. Case closed? Not so quickly.

Although the play was popular during the 12th century and certainly has affected the Christmas customs, it wasn’t performed for multiple centuries in a row.

After the rise of the Renaissance, The Paradise Tree nearly vanished from theaters.

Some Catholics continued putting up a Christmas tree, and so did their children, preserving the tradition. But it wasn’t yet a universal custom.

During the years when theaters in Germany were banned, we can still find mentions of Christmas trees.

For instance, a 1605 letter of a Strasbourg resident describes a tradition existing in the region: “At Christmas, they set up fir trees in the parlors at Strasburg and hang thereon roses cut of many-colored paper, apples, wafers, gold-foil, sweets.”

Today, most historians agree that the first mention of a Christmas tree happened in the 12th century. However, some nations still strive to assign themselves as the motherland of this tradition.

Two Baltic states, Estonia and Latvia, can’t come to an agreement on who was the first to put up a Christmas tree.

Estonians insist the first-ever Christmas tree was brought to the Tallinn Christmas market in 1441 by Brotherhood of the Blackheads.

It was a Livonian Orden of merchants, ship owners, and foreigners. The Christmas tree was placed in the center of the city.

However, Latvia, that just like Estonia, at the time belonged to Livonia, claims that a similar tradition occurred there even earlier. The first Christmas tree was allegedly placed in the central square of Riga by the same Orden.

Estonia and Latvia don’t lie; Christmas trees really were a thing in Livonia at that time. However, they didn’t invent the tradition but rather helped to popularize it in Europe and Russia.

In 1711, even the emperor of Russia, Peter the Great, participated in setting up a Christmas tree in Tallinn.

The Rise of the Christmas Tree in Europe

So, the Christmas tree custom appeared back in the 12th century and continued to spread across Germany during the upcoming centuries.

In the 15th century, the demand for Christmas trees in Germany was so high that new laws have passed prohibiting cutting down fir branches.

But it wasn’t until the 19th century that the tradition took over the entire continent.

The tradition became deep-rooted among German Lutherans in the 18th century. Then, in the early 19th century, German Prince Albert married Queen Victoria of Britain. This way, the custom came to England.

Following the example of Germany and England, Netherland, Austria, Poland, and other European countries have adopted the tradition.

It isn’t clear how exactly the custom has spread to these countries, but most likely, with merchants traveling across the continent and the development of newspapers.

Who Brought Christmas Trees to America

The first documented mentions of Christmas trees in America date to the late 18th to early 19th centuries. That’s about the same time when the custom became popular in Europe.

Flanders writes about a pine tree set up in North Carolina in 1786. An American Indian school managed by Moravian missioners has sent children to “fetch a small green tree for Christmas” back in 1805.

In 1830, a giant Christmas tree was out on display in Pennsylvania state.

References continued to pop up throughout the entire 19th century as more and more German immigrants arrived in America.

It isn’t surprising that Christmas trees came to America so late compared to the rest of the world. New England Puritans considered Christmas to be a sacred event and strived to stamp out pagan influence, punishing any frivolity.

Oliver Cromwell, a British political leader of the 17th century who had a significant influence on New England Puritans, was against the tradition.

He believed that decorating Christmas trees and expressing joy was desecrating the occasion.

In 18851, the first Christmas tree retail lot has opened in New York. In the late 19th century, Christmas trees became widely accepted in America, displayed in every state and every mall.

Why We Decorate Christmas Trees

We’ve set clear the reason people associate fir trees with Christmas. But why do we decorate them?

As you now know, The Paradise Tree play mentioned a fir tree with branches covered in apples. This could be the early origin of colorful balls we’re hanging on Christmas trees today.

In 12th-16th century Europe, people who couldn’t afford a real Christmas tree used to set up wooden pyramids decorated with candles as a symbol of light, replacing the darkness.

With the Christmas tree tradition arrival in England, Queen Victoria has advanced the decoration trends.

She embellished the first ever Victorian tree with small toys, gifts, popcorn strings, and fancy cakes. Perhaps, that’s the closest depiction of an old-fashion Christmas tree to its modern image.

The Christmas tree has come a long way until it has finally been established as a universal tradition. Today, they are traditionally decorated with string lights, bows, stars, colorful glass or plastic balls, and toys.

The largest Christmas tree in the world was set up at Seattle’s Northgate shopping center in 1950, measuring 221 feet.

Still, America’s most famous Christmas tree remains the Rockefeller Center fir, which gets installed annually and is at least 65 feet tall.

It’s been a symbol of winter New Tork for over 80 years, drawing tourists and celebrities from all over the world.

Artificial Christmas trees are gaining popularity, too. Research by American Christmas Tree Association indicates over 80% of trees on display are fake.

Such a shift is connected solely to the practical benefits of artificial Christmas trees. They last endlessly, can be easily assembled and disassembled, and are cheaper in the long term.

Plus, an artificial tree won’t get ruined if your cat jumps on it. But still, the magical smell of a real Christmas tree can’t be replicated.

Setting up and decorating your Christmas tree is one of the most exciting parts of Christmas, but you’ll need the best Christmas tree stand for your particular tree to keep it securely upright. Whether large or small, real or artificial, you need a secure stand for your tree. There are few things more important during […]

Although Christmas trees have been around for centuries, their artificial counterparts have only existed since the 1930s, when they first went on sale. There are several reasons why you might purchase one – and in this buying guide, we’re going to run through five specifications to look for. Time seems to be a luxury that […] Can I Put my Christmas Tree Up Before Thanksgiving?

A question that boggles the minds of thousands of Americans right now is whether you can put up your Christmas tree before Thanksgiving. That’s a justifiable concern, as Thanksgiving is a national holiday, and many consider such a practice disrespectful and stealing attention from it. The truth is, there is no rule regarding when to […]

Everyone loves decorating for Christmas, but putting things away is another story; that’s why the best Christmas tree bag will make your life a whole lot easier. Storing your artificial tree in a quality bag will keep it in good shape, ready to use year after year. When it comes to Christmas decorating, few things […] Searching for the best Christmas ball ornaments is a mind-boggling experience! The sheer number of styles, materials, and finishes can be a bit overwhelming. It’s helpful to break down the categories a bit to find what best suits your tastes and needs. Beautiful Christmas ornaments emphasize the rich, dark green of holiday trees. The addition […]