The Complete History of The Midnight Mass 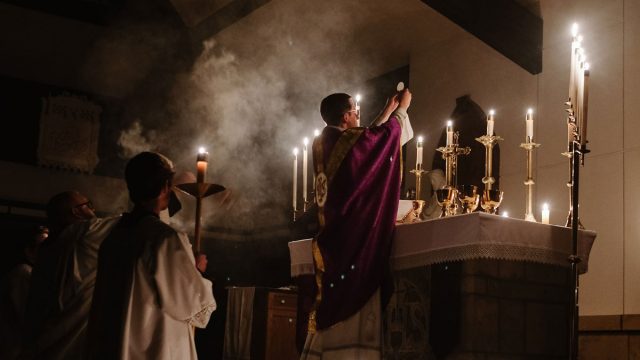 Christmas is one of the most important religious holidays in Christianity, and many people worldwide celebrate it by attending the Midnight Mass.

However, not everyone knows the history of the Midnight Mass and the symbolism behind it.

Unfortunately, the tradition slowly dies out due to the surging commercialization of Christmas. Some Christians don’t even know what a Midnight Mass is.

Meanwhile, Midnight Mass, also known as Midnight Vigil, is the most important liturgy of Christmastide, held on December 24th, Christmas Eve. Midnight Mass starts in the late evening, marking the birth of Christ.

Today, the Midnight Mass tradition is transforming to accommodate the changes in parishioners’ behavior and their perception of Christmas.

Christmas church services are often held earlier in the day and broadcast online.

Origins of the Midnight Mass

The tradition of attending a Midnight Mass on Christmas Eve is about the same age as Santa Claus. It started in the fourth century in Jerusalem and was brought to the western world by a European woman Egeria.

Egeria is known for writing a detailed account her journey to the Holy Land. This piece has a great historical significance, as it’s one of the first documented pilgrimages to Jerusalem.

During her journey, Egeria observed people in Bethlehem, the motherland of Jesus, honored his birth of Christ with a Midnight Mass.

The mass was followed by a torchlight procession to the Church of the Resurrection in Jerusalem, ending at dawn.

Egeria shared her observations with people in her hometown in Spain. From there, the tradition began to spread across the country and the neighboring regions.

The Midnight Mass tradition received a big boost under Pope Sixtus lll, the fifth-century bishop of Rome. The first Midnight Mass in Italy was held in the Basilica of Saint Mary Major in 430, at that time newly-built.

By the 12th century, every Catholic church in Europe observed the Midnight Vigil. Before, only the Pope could carry out three masses on Christmas Day. But in the 1300s, all priests were granted this permission.

By the 16th century, Midnight Vigils became so popular that San Diego de Soria, the head monk at the Convent of San Agustin Acolman, asked the Pope to hold them outdoors because the churches couldn’t fit all the attendees.

The Symbolism Behind the Midnight Mass

In the U.S. and most of Europe, Christmas is celebrated on December 25th. Why do people attend church on December 24th then, let alone at night?

The reason behind this is simple. We don’t know the exact time Jesus was born – we don’t even know for sure that Christmas Day is his birthday. It was never mentioned in the Bible.

Instead, his birthday was calculated based on the date of his conception – Nisan 14 by the Jewish calendar, which translates to March 25th by Julian calendar. Nine months later is December 25th.

By attending the Midnight Mass, Christians welcome Jesus into the world and celebrate his birth. Midnight is chosen as the time when Christmas Eve gives way to Christmas Day.

In some regions, Midnight Masses face an intense competition of dawn masses. In the Philippines, dawn masses are called Simbang Gabi. Their history stems from colonial times when Spaniards ruled the country.

Most of the Philippines population in the 17th century were farmers. They had to stand up for work early due to the extreme heat of the midday sun.

Consequently, most Filipinos attended the Midnight Mass exhausted after a long day of work in the fields.

Local priests noticed this and came up with the idea of Simbang Gabi – Christmas Mass that happens at dawn before farmers get to work.

This allowed Filipinos to celebrate the birth of Christ without making amendments to their schedules.

The first Simbang Gabi was held in 1669. To this day, many Filipinos prefer to attend church on Christmas Eve morning and leave the evening for gatherings with family and friends.

During the morning mass, churches often offer pastry and rice cakes. Perhaps, that’s necessary to give people strength in the morning – who could withstand an entire mass without a breakfast?

In Spain, people light up oil lamps at their homes before proceeding to the church to hear the Midnight Mass. After locals return home, they sit down for an abundant feast.

People in Mexico attend not one Midnight Mass but nine throughout the Posadas season, commencing on December 16th. This period commemorates Mary and Joseph’s journey to Bethlehem. The word “posadas” is derived from Spanish for shelter.

Before attending the church, Mexicans participate in a ceremonial procession, carrying candles through the town’s main streets. The procession is often led by two people dressed as Mary and Joseph.

A similar nine-day tradition is observed in Venezuela and the Philippines, known as Misa de Aguinaldo. This translates as “Christmas box” because, after the vigil, people exchange gifts.

In some European countries, particularly in France and Italy, Midnight Mass is followed by a large feast known as Réveillon. Its name is derived from the word “awakening,” as people traditionally stay awake all night.

In Ireland, Midnight Masses have become more of a social than a religious event. People meet with friends, family members, and other acquaintances they haven’t seen for a while to chat and have fun.

Due to such a positive attitude to the event, the church attendance rate in Ireland is one of the highest in Europe.

Many churches display the Nativity Scene at the altar during Christmas midnight services. This custom is common in most Christian regions, from southern Mexico to northern Sweden.

Midnight Masses are held not only in Catholicism. The tradition is also observed in Orthodox Christianity, Lutheranism, Anglicanism, and Methodism.

In Orthodox Christianity, that’s especially common in the east, people celebrate Christmas on January 7th, following the Gregorian calendar. Midnight Masses aren’t attended by such a large percentage of the population as they are in Europe.

The truth is, Midnight Masses in Orthodox churches are much more prevalent at Easter. Christmas masses are attended by the most devoted Christians who observe strict fast until the first star appears in the sky.

Nativity fast in Orthodox Christianity serves the same purpose as Advent season in Catholicism – they even originated from the same tradition.

After people return home from the Midnight Mass, they have a traditional Christmas dinner consisting of 13 dishes. This number is meant to represent Christ and his 12 Apostles.

Even in the smallest villages, nearly every Catholic church hosts a Midnight Mass on Christmas Eve. But some significant Christmas services are worth attending for anyone at least once in a lifetime.

So, the Midnight Mass in Saint Peter’s Basilica in Vatican City held by the Pope is considered the most important church service in Europe.

You can watch it on television or online, but nothing can replicate the feeling of seeing the architecture of this basilica in real life. Its size is impressive, too – the building has a capacity of 60,000 people.

Of course, the most noteworthy Midnight Mass outside of Europe is held at the birthplace of Jesus, in the Church of Nativity in Bethlehem. It’s the very place where the first Midnight Mass in the world was held.

The church was initially built in 327 A.D. and soon after visited by Egeria, who brought the tradition to Europe.

One of Russia’s largest Catholic Midnight Masses is held in Moscow’s Cathedral of Immaculate Conception. This cathedral is a remarkable example of neo-gothic architecture.

Of course, the main Midnight Mass in France is held at Notre Dame de Paris. It’s one of the most outstanding churches worldwide that attracts millions of tourists annually, especially at Christmas time.

If you ever are in London on Christmas Eve, consider visiting the Westminster Abbey. Each year, over 12,000 Christians gather in this gothic church to celebrate the birth of Christ.

Nowadays, Midnight Mass popularity is steeply declining, and churches have to adapt.

Many people perceive Christmas merely as a family holiday rather than a religious one. They prefer to spend the night celebrating at home instead of going to church.

Often, Midnight Masses are broadcast online or on television. That’s partially related to the unwillingness of people to leave their homes.

The second reason is to allow those who live far away to see the largest masses in the country.

For instance, the Midnight Mass at Saint Peter’s Basilica in the Vatican hosted by the Pope usually starts at 9:30 p.m. and is televised live to over 72 countries.

The same practice is observed in Russia – people watch a Midnight Mass held by The Head of the Russian Orthodox Church, Patriarch Kirill, in Moscow.