The Complete History of Wassailing 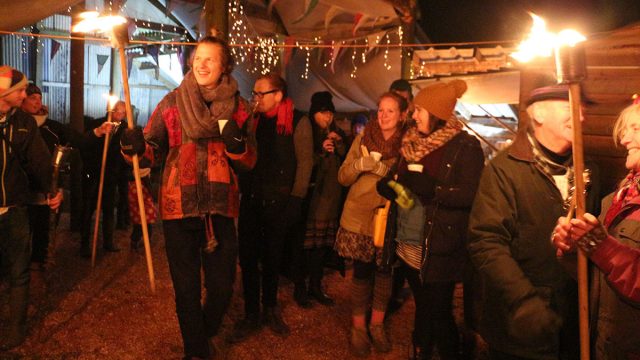 Wassailing and caroling have only one minor yet important distinction – wassailing involves drinking alcohol.

Funnily enough, wassailing originated in pagan times as a completely different custom. Like modern wassailers, pagan wassailers used to sing and drink, but with an entirely different purpose and rituals.

As you may have already guessed, drinking played a crucial role in the wassailing process.

The drink recipe didn’t change much since the pagan times – you likely know it as mulled wine or mulled cider, though the Brits still often call it the old name, wassail.

During the Protestant Reformation of the 17th century, wassailing was banned in the UK, along with many other Christmas traditions.

Unfortunately, the custom didn’t experience a renaissance after the Puritan law was diminished, though it remained strong in its counties of origin.

Today, wassailing festivals are common in some parts of the UK and, surprisingly, in the US.

Unlike many other Christmas customs that were brought here by British colonialists, wassailing tradition only acquired popularity a decade ago.

You can participate in fun, too, if you ever visit Woodstock at the start of December or New York in February.

What Exactly Is Wassailing?

The term “wassailing” has two definitions, both of which are historically correct.

The first definition of “wassailing” states that it is the process of drinking alcohol, particularly warmed ale, wine, or cider blended with spices, and enjoying oneself in a lively way – in other words, feasting and celebrating.

The second definition states that wassailing is the process of walking from house to house at Christmas singing carols. Today, people practice both forms of wassailing.

The word “wassail” also has two definitions. First, it’s derived from Old English “wes hal,” meaning “be well” or “be in good health.”

Initially, the word was used as a sort of a greeting but later developed into a toast. When someone exclaimed the toast, others would respond with “drink hael,” translating as “drink well.”

Lastly, “wassail” refers to sort of a drink made from warmed ale, wine, or cider, spiced with cinnamon, cloves, ginger, and nutmeg, and often topped with apple slices.

In other words, wassail is a sort of a mulled wine. Wassail was a core element of wassailing.

Like many other British Christmas traditions, wassailing has pagan origins.

Long before Christianity began to spread on the British Islands in about 600 and onwards, people celebrated winter solstice festivals on about the same dates as modern Christmas, at the end of December.

Pagans believed in different gods, such as the god of water or the god of sun.

In the west of England, Druids used to sing to trees in orchards during winter solstice festivals in the hope of a good harvest. They believed singing would please the gods and grant them better thrive.

Wassailing was meant to wake up the cider apple trees and scare away evil spirits. The ceremony details differed from village to village, though certain elements remained constant.

So, the singing procession consisting of farmers, farmworkers, and villagers, going from orchard to orchard, was led by wassail King and Queen.

The wassail Queen had to be lifted up into the boughs of one of the cider apple trees in the orchard and place a piece of toast soaked in wassail drink as a gift to the tree gods.

While doing so, she would recite a poem praising apple trees. The procession then would begin to shout and bang drums before moving on to the next orchard.

It was believed to maintain the fertility of the entire orchard, and thus, the oldest tree had to be carefully preserved.

To this day, the western part of England, particularly the regions of Cornwall, Dorset, Devon, and Somerset, is known for its cider production. These regions hold annual wassail festivals on January 17th, the old date of the Twelfth Night.

During the wassailing ceremony, the wassail drink was drunk from the wassail bowls – English pagans weren’t too creative with the naming.

Based on the large size of the ancient exemplars found by historians, we can conclude that the wassail bowl was passed around as sort of a loving cup, letting every member of the procession drink from it.

Some sources also mention mulberry and green maple. Therefore, it is likely that wassail bowls were initially made from wood, but later, their design and materials became more sophisticated.

For instance, a 17th-century wassail bowl created by the Worshipful Company of Grocers was made from silver and intricately engraved.

Historians also found records of puzzle wassail bowls and jugs. They featured multiple spouts, and as someone attempted to drink from one of the spouts, they were drenched from the other.

During Oliver Cromwell’s Puritan rule in the mid-17th century, many Christmas traditions were suppressed, and so was wassailing along with wassail bowls.

It was viewed as desacralizing for such an important religious holiday. For his reason, most wassail bowls that were preserved to this day date to the end of the Puritan era.

While the tradition of orchard wassailing continued to be widely observed in Britain throughout centuries, it acquired a second meaning over time.

In the Middle Ages, the poor expected privileges during the Christmas season, that were denied to them at other times.

Some of the privileges included visiting homes of the wealthy and drinking together with them. So, the poor started going from house to house, singing wassailing songs.

Wassailers were usually people serving a feudal lord of the manor. The feudal lord had to demonstrate charitable goodwill to his servants by giving them some money or food.

One of the most popular wassailing carols, “Here We Come A-wassailing,” clearly distinguishes wassailers from beggars: “We are not daily beggars that beg from door to door, but we are friendly neighbors whom you have seen before.”

In exchange for food or money, the feudal lord would receive good blessings from the wassailers. If the lord refused, wassailers wouldn’t go away until they complied and could even vandalize the house.

At the beginning of the 16th century, the feudal system in England came to an end, yet the wassailing tradition survived. Instead of visiting houses of feudal lords, people started visiting their neighbors.

When Puritan law was established in Britain in the 17th century, any Christmas traditions that were considered disrespectful to the holiday were banned. For example, Puritans viewed wassailing as home invasions by drunken crowds.

This was partially true. As wassailing involved large amounts of alcohol, wassailers were often rowdy and would roam the streets shouting, shooting rifles, and damaging the property of wealthy people.

Throughout the 18th century, Puritans managed to move Christmas celebrations from streets to homes.

After the Puritan law was gone, wassailing developed into caroling that didn’t involve drinking and traditional wassail “demands,” such as “now give us some figgy pudding” or “and we won’t go until we’ve got some.”

In other words, caroling as we know it today is a modern version of wassailing.

However, the distinction is very vague, and many Christmas carols involve mentions of wassailing. Sometimes, carolers even sing the same songs wassailers sung centuries ago.

These days, wassailing was widely replaced with a more modest practice of caroling.

While some wassailing songs, such as “Here We Come A-wassailing” and “The Gloucestershire Wassail,” can still be heard on the streets of British towns at Christmas time, the core element of drinking wassail is lost.

Perhaps, that’s related to the large number of children participating in caroling.

Orchard wassailing practice, surprisingly, has preserved better. Although it’s limited to specific regions in Britain and a few other places around the world, the annual wassailing festival tradition remains strong.

Perhaps, the most famous wassailing festivals are held in Dorset, Somerset, and Devon – the regions where the tradition started.

Although Twelfth Night is on January 5th, the festivals are held on January 17th, as that was the correct date before the introduction of the Gregorian Calendar.

Like in ancient times, wassailers make noise by banging drums and plates, singing, and clashing sticks. Wassail drink is poured at the base of apple cider trees, and bread soaked in wassail drink is hidden between branches.

While wassailing was never a thing in the US, American cider makers found the tradition fun. The first wassail festival in the US was held in New York by Rootstock Ciderworks in 2014.

Another famous wassailing festival in the US is held in Woodstock, Vermont, from December 10th to December 12th.

It doesn’t involve orchard singing, though – instead, people dip candles, tell holiday stories, ride a sleigh, and, of course, warm up drinking wassail. A similar event called Wassailfest is held in Texas.