What is Hanukkah? Is it Linked to Christmas? 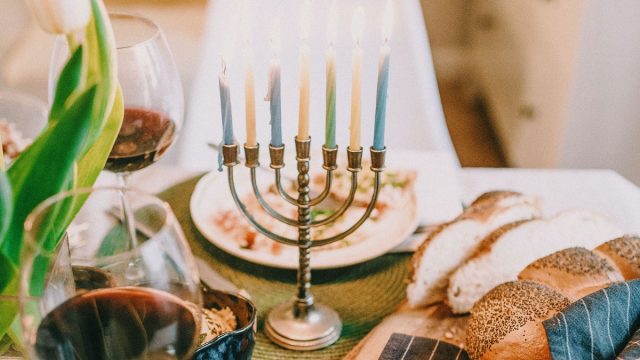 Many in the US are confused about what is Hannukah, calling it the Jewish Christmas.

But they’re very wrong, as Hanukkah, or Chanukkah, is the Jewish festival of lights.

It has nothing to do with the Christian celebration of Jesus’ birth.

Indeed, many Jews residing in America have adapted Christmas traditions for the Hanukkah festival. So why not take the best of both worlds? For instance, gift exchange never was a thing in Jerusalem but is popular here today.

Hannukah and Christmas have some things in common that occurred naturally, too. The most apparent ones are that both are celebrated with family in winter.

During both holidays, people light up candles and eat delicious foods.

But Christmas and Hannukah shouldn’t be confused. They celebrate two non-related occurrences and belong to different religions. Thus, any similarities between the two are nothing but coincidences.

Christians don’t necessarily have to know everything about Hannukah, just like Jews don’t have to be experts on Christmas. But understanding the difference is essential to co-exist with mutual respect.

The word Hanukkah comes from the Jewish word for dedication, as it celebrates the dedication of Jewish soldiers who fought for the Holy Temple in Jerusalem.

The story of this festival started in 164 BC. In 200 BC, the Greeks have captured Jerusalem. They then insisted Jewish people must now worship Greek Gods in their Holy Temple.

But, of course, Jews weren’t delighted about that, and a priest, Mattathias, along with his son Judah Maccabee, revolted.

So, a group of fighters named Maccabees under the command of Judah of the Maccabees fought with the Greek army to reclaim the city.

When the Greek army was defeated, Maccabees sought to re-light a menorah, or an oil candelabrum, in the Holy Temple.

Unfortunately, they only had enough oil to keep it lit for one day. However, the menorah has magically lasted for eight days.

For this reason, Hanukkah is celebrated for eight days. Like the holiday of Passover, Hanukkah commemorates freedom from foreign oppression.

You may have seen a candelabra called a menorah with nine prongs that Jews light up during the Hanukkah celebration, and now you know why they do this.

But wait, why does the menorah have nine candles if the oil lasted for eight days?

This is because the candle in the ninth prong located in the center is used to light up other candles. The menorah is then proudly placed in a window or on the dining table.

Another Hanukkah tradition has less obvious roots. During the celebration, Jews eat jelly donuts, pancakes, and other delicious fried foods.

You’re right; jelly donuts didn’t exist in 164 BC. But these foods symbolize the miracle of the oil that kept the menorah alight for eight days. Any food fried in oil will do, so why not choose the most tempting treats?

As for entertainment, during Hanukkah, Jews are playing dreidel games. A dreidel is a four-sided spinning figurine with a Hebrew letter carved on each side.

These letters are the first letters of the words “ness gadol haya sham,” which translates as “a great miracle happened there.”

There’s no set rule to which games must be played with a dreidel. Typically, it’s some kind of a chance game. Players win or lose depending on the letter they land on.

Historians aren’t sure how the tradition appeared. Some believe Jewish children used dreidels to distract Greek soldiers back in the day. Others think it’s a new tradition originating from German game trendel or Irish game teetotum.

The Hanukkah tradition kids look forward to the most is receiving gelt, a chocolate disc wrapped in gold foil.

This coin-like treat can be given for winning in dreidel games or simply as a treat (in addition to donuts and pancakes, of course).

Surprisingly, historically, this tradition wasn’t linked to kids in any way. Instead, adults used to give coins to workers such as butchers, doctors, or teachers during Hanukkah in the Middle Ages as tips.

Some historians also believe the tradition evolved as an attempt to ensure even the poorest Jews could afford to light up the menorah on Hanukkah.

Like many religious holidays, Hanukkah is celebrated in a family circle. Jews don’t go to synagogue, spending time with their loved ones.

Initially, gifts weren’t a Hanukkah tradition. But in modern times, Jews often exchange gifts on the sixth night of the holiday. Some families may exchange small gifts each night or not follow the tradition at all.

The similarities between Christmas and Hanukkah are easy to draw. Let’s start with the fact that both holidays are traditionally celebrated in the family circle.

Neither Jews for Hanukkah nor Christians for Christmas go to synagogue, church, or a nightclub.

The family celebration in both cases involves plenty of delicious food, yet the types of food differ. It’s a time when everyone can forget about their diet and enjoy treats, some of which aren’t often eaten at other times of the year.

Traditionally, Hanukkah didn’t involve gift exchange. However, some historians believe that the emerging of this custom is related to the common perception of Hanukkah as Jewish Christmas in the Western world.

Still, today, many Jewish families have adopted the gift exchanging tradition. After all, why not bring even more fun to this festival of light and joy?

Another similarity between Hanukkah and Christmas is the custom of lighting candles. While Jews light up the menorah, Christians do the same thing with Advent candles.

Apart from four Advent candles, Christians light up candle bridges. Despite common misconception, these aren’t a modern version of the Advent candles, nor are they meaningless decorations.

Candle bridges originated in Germany, in the mining region of the Ore Mountains. Miners would light them up when their shift began, and the arch symbolized mine tunnel entrance.

An unexpected twist on Christmas traditions, indeed, but today’s story isn’t about them.

Finally, Hannukah is celebrated at about the same time of the year as Christmas. Sometimes, it may fall on the exact same dates, causing even more questions regarding its relation to Christmas.

Although Hanukkah and Christmas have numerous similarities, they have even more distinctions. The fact that these holidays belong to two different religions is only the tip of the iceberg.

First of all, although Hanukkah may be celebrated at the end of December, it doesn’t have a fixed date in the civil calendar. The Jewish calendar has only nine months, so the starting date of Hanukkah constantly changes.

Talking of the calendar differences, Hanukkah lasts for eight days. Christian winter holidays, in turn, last for twelve days, known as The Twelve Days of Christmas.

They start on December 24, Christmas Eve, and end with Epiphany, January 6. However, some families regard Christmas as a single-day celebration.

The menorah is being lit up gradually, candle after candle, each day of the festival. While Christians also progressively light up the four Advent candles, they do so once a week on Sundays.

Lighting up the candle bridge doesn’t involve any rituals. Modern candle bridges can be simply plugged into a socket.

The gift-giving traditions differ, too. The story of Christmas gifts dates to Saint Nicholas, who allegedly dropped a bag of gold down a poor man’s chimney to help him marry his daughter.

For Hanukkah, gift-giving is a relatively novel tradition. Furthermore, it doesn’t revolve around legends of a mythical old man with a white beard. There’s no miracle in this process; family members simply exchange gifts as a sign of their affection.

While during Hanukkah, families play dreidel games, Christians have no set tradition related to entertainment. Jews also never put up a Christmas tree on Hanukkah.

Lastly, Hanukkah doesn’t celebrate a legend but rather a real historical occurrence. That’s not to say that Bible is a lie or Jesus didn’t exist.

But the circumstances that serve the origin of Hanukkah are much easier to track and prove as they happened long after the birth of Christ.

Hanukkah in The US

Today, America is home to millions of Jews. But it wasn’t always that way. So how did Hanukkah come to America, and how is it celebrated?

America’s Jewish population was insignificant until the late 19th century.

Then, of course, random sailors and merchants arrived here, but there was no significant influx of immigrants. As a result, the total Jewish population in the US at that time counted under 250,000 people.

Although the community wasn’t large, the Jews who assimilated in America strived to make synagogues, kosher meat, and other essentials more accessible.

As a result, by the end of the Civil War, America featured numerous synagogues and became more appealing to Jews.

Cincinnati Rabbi Max Lilienthal, who lived in America, was inspired by local Christmas events for children and decided to adapt them for kids of his own congregation.

Related Articles
Why is Christmas Day on December 25?Why Do We Say Merry Christmas? (And Not Happy Christmas)
Hello, I'm Carolyn