Holly, Ivy, and Other Christmas Plants 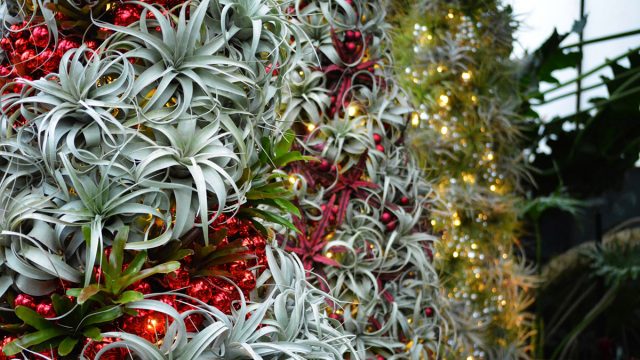 Perhaps, the most well-known Christmas plants are holly and ivy.

These evergreen plants are commonly used in all kinds of Christmas decorations, from wreaths and garlands to prints on tablecloths.

However, many of us don’t know the reason these plants became associated with Christmas.

Like many Christmas traditions, the history of holly and ivy has pagan roots. Over time, pagan celebrations and customs were replaced with Christian, but the symbolism of these plants remained unchanged.

Holly and ivy aren’t the only plans closely linked to Christmas, though.

Some lesser-known worldwide plants, such as Christmas cactus, Christmas rose, or Star of Bethlehem, take their names from meaningful Christmas legends and are more popular than holly or ivy in their native regions.

Funnily enough, the legends of Christmas cactus and Christmas rose are similar to that of poinsettia flower in many ways despite having different regional origins.

Yet only poinsettia managed to acquire worldwide recognition as a Christmas plant.

Instead, it’s a term referring to a scope of evergreen conifers, such as spruce, fir, and pine, each with its unique fragrance and appearance.

Holly is an evergreen plant from the family of Aquifoliaceae shrubs and trees.

Holly plant is distributed around the globe and counts over 600 species, though the types we’re all familiar with are English holly and American holly. Both have dark prickly green leaves and red fruits, but sometimes, you can also come across yellow fruits.

In Celtic mythology, the holly tree is believed to be the controller over dark, winter months. Its evergreen leaves symbolize everlasting life, fertility, and hope for the soon arrival of spring.

Holly wreaths worn by Celtic chieftains were believed to bring good luck. They were also used to bathe newborns, protecting them from harm.

Over time, holly was adopted by Christians as a Christmas plant. Its sharp leaves represent Christ’s thorned crown, and the red berries represent his blood.

Same as in pagan times, the evergreen color of leaves symbolizes eternal life and Jesus’ resurrection.

In the botanical world, ivy is known as Hedera. Its native region is Britain, though today, ivy is also common in Japan, Russia, Nepal, Persia, Algeria, and the US.

It’s a climbing plant that clings to nearly any surface using small roots that grow along the stem. You’ve likely seen houses overgrown by ivy numerous times – they carry a very special aesthetics.

Like holly, ivy is an evergreen plant whose history stems from pagan times. Its greenery that remains lush throughout cold winter months and its clinging roots led to this plant being associated with fertility and the power of life.

Ivy’s connection with Christmas is related to the British origin of Santa Claus, Father Christmas.

He was typically portrayed in green attire, with his head adorned with an ivy wreath. To this day, ivy is mainly used in Christmas wreaths and garlands.

On a jollier note, goblets made from ivy wood were long thought to neutralize the side effects of alcohol. In Scotland, ivy was used for love foretelling and is still closely associated with friendship and love relationships.

However, at some point, ivy was banned from Christmas celebrations due to its ability to flourish in the shade.

It has been linked with the notions of secrecy and hidden desires, the exact opposite of what Christianity promotes. Thankfully, today, ivy is again a popular plant in Christmas decorations.

Poinsettia we’re all used to is a plant with large, festive-red flowers. Sometimes, you may come across pink, white, yellow, and speckled varieties.

However, potted poinsettia sold in stores has little to do with its wild ancestor growing in Mexico woods.

Furthermore, the colorful part we consider to be a flower is not a flower but a bract. Poinsettia’s flowers are contained in the tiny yellow globes surrounded by these colorful petals.

Poinsettias carried a special significance even in Aztec times, but not for their symbolism. Instead, the plant was used to make purple clothes dye and medicine for fever.

Only in the 19th century did poinsettia acquire association with Christmas. It stems from a legend about a poor Mexican girl who had nothing to present baby Jesus at Christmas Eve service.

Her cousin said that even the smallest gift would express her love for Jesus, and so, she made a bouquet from weeds picked off a roadside.

After the girl had put the weeds next to the nativity scene, it turned into a beautiful red flower. So, poinsettias became associated with miracles and are today known as Flowers of the Holy Night.

The color of poinsettia’s bracts is believed to represent Christ’s blood, and the shape of its leaves symbolizes the Star of Bethlehem.

Douglas fir is an evergreen plant native to North America and Eastern Asia, commonly used as a Christmas tree in these regions.

Despite its name, Douglas fir is not a real fir, nor is it pine or spruce. It comes from the family of false hemlocks.

The Douglas fir was commonly used as a Christmas tree since the 1920s and was close to extinction in North America in the following 40 years.

Thankfully, in the 1950s, the trees started to be cultured on plantations to preserve those growing in the wild. In natural conditions, Douglas fir can live for up to 1,000 years and exceed 250 feet!

Douglas fir has a distinct smell resembling pine with a hint of orange peel.

For this reason, it’s commonly chosen as an inspiration for Christmas-themed fragranced candles. Douglas fir branches are strong enough to hold the heaviest ornaments.

As the name suggests, the Christmas cactus is closely linked with Christmas. The reason for this is its flowers, blooming close to the Christmas season.

An old Brazilian legend tells a poor boy who prayed to heaven for a sign of Christmas, sitting in the jungles.

Days went by without a sing, until one morning, he woke up surrounded by bursts of pink flowers on cactus branches. Today, Christmas cactus blooms symbolize answered prayers and Christ’s birth.

Unlike most cactus species, Christmas cactus is native to hot, arid environments. As it’s native to the rainforests of southern Brazil, the plant prefers humidity and slight shade.

The flower color varies – they may be pink, red, purple, or orange, and appear each year with proper care.

Spruce is one of the most common Christmas tree types, also commonly seen in garlands, wreaths, and other decorations.

Blue spruce has bluish-green needles with blunt tips, while white spruce is greener and has stiffer branches. Although the aroma of spruce is fresh and pleasant, it becomes bad when needles are crushed.

Most spruce species are native to North America, though some also grow in Asia, Siberia, and North Europe.

Spruce growing in the wild is a tall tree, sometimes exceeding 200 feet. Spruce can be distinguished from other pines by its four-sided needles and strong branches that withhold heavy ornaments.

Balsam fir is, perhaps, the most fragrant Christmas tree. Its scent is iconic, lasting throughout the entire Christmas season and often inspiring manufacturers of home fragrances.

Balsam fir needles have a luscious green color and are softer than those of spruce. Wild trees don’t usually exceed 66 feet.

The correct botanical name for Christmas rose is Helleborus Niger or black hellebore. This evergreen flowering plant comes from the buttercup family and is poisonous if consumed. Still, the plant is tightly linked with Christmas.

An ancient legend tells that a young girl had nothing to give Christ child for Christmas. When she cried, her tears fell on the snow, and a white flower sprouted out of it, providing the girl with a gift to offer.

During Middle Ages and in the Victorian Era, Christmas rose was used to treat a number of conditions, including insanity and worm infestation. Today, however, the plant is used solely for decoration.

Cedar is a tall evergreen plant from the pine family, native to the Mediterranean region and mountains of western Himalaya.

However, the tree is commonly cultivated in temperate climates and thus is a popular Christmas tree alternative to firs and spruces.

Cedar is nearly as fragrant as balsam fir, but its scent is more earthy and wooden. The plant is used in Christmas wreaths, garlands, or as an ingredient in home fragrances.

Star of Bethlehem is a winter bulb from the lily family, native to the Mediterranean region. The plant’s scientific name is derived from Greek for “bird’s milk flower.”

Its small white flowers are similar to wild garlic and bloom in late spring. They are sometimes used in Christmas flower arrangements, though not nearly as often as holly or pine.

As you may have guessed, the name of Star of Bethlehem stems from a nativity story about Three Wise Men who traveled to Bethlehem from the East and brought infant Jesus gifts.

In religious ceremonies, the flower represents innocence, purity, and hope.

Legend tells that after the guiding purpose of Star of Bethlehem was complete, God thought it was too beautiful to banish from the earth and instead burst it into thousands of pieces.

When these pieces descended to earth, they turned into tiny white flowers that covered Himalayan hills.