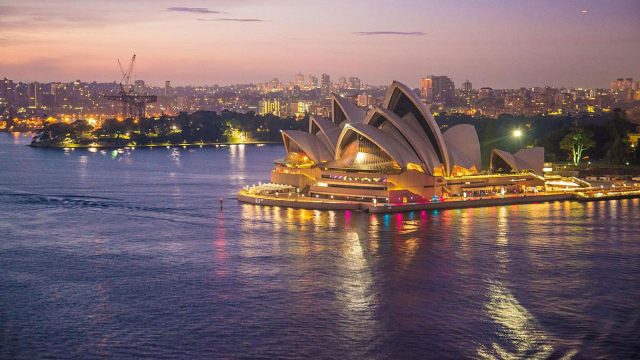 Christmas in Australia is nothing like Christmas in the U.S. If not for Christmas lights, you wouldn’t guess it’s holiday time.

Australians celebrate Christmas on December 25, but it feels more like the middle of the summer than a winter wonderland.

Christmas falls on one of the hottest months in Australia, so Aussie holiday activities include surfing and camping rather than skiing and building snowmen.

The history of Christmas in Australia began in 1788 when Britain colonized the island. Australians borrowed many traditions from the British but adapted them to the local peculiarities.

Australian Christmas customs are undoubtedly some of the most unusual we’ve ever heard of, and the wide range of fun activities will suit any preference.

Christmas is a quiet, religious holiday spent in the family circle in many countries. However, Aussies yet again go to the beat of their own drum.

If you go out on Christmas Day in any Australian town, you’ll be amazed by the array of loud street parties welcoming everyone to join the fun. Aussies gather outdoors after the sunset to eat and drink, dance, and be merry.

Thankfully, Australian weather allows partying on the streets all night long. We admire the tradition because no Aussie feels lonely at Christmas, surrounded by hundreds of jolly locals.

Going on a festive road trip is, perhaps, one of the most unusual Australian Christmas traditions.

Americans living far from their families are used to traveling to spend winter holidays with their loved ones, but road trips truly are a staple entertainment in Australia.

Australian Christmas is full of adventure and new experiences. Whether it’s a short trip to the local beach or a long stretch along the Pacific Coast, Christmas isn’t Christmas without travel.

Most families go by car or van, but some Aussies prefer bike trips. Regardless of the trip duration and destination, everyone strives to get back home by December 25 to celebrate Christmas Day with BBQ and cold beers.

Melbourne has hosted the Carols by Candlelight festival every year since 1938.

It’s one of the oldest Australian Christmas traditions, which involves people singing carols by candlelight (thus the name) and featuring performances of famous local and international artists.

The performances are typically accompanied by a symphony orchestra and held outdoors. Interestingly, the tradition stood strong during World War ll and the global pandemic, although the attendee count declined drastically.

The festival focused on traditional Christmas carols and had a noticeable religious influence back in the day. However, the festival program has shifted towards popular culture in the last decades.

Melbourne isn’t the only town hosting annual Christmas musical events in Australia – Sydney has been hosting the Carols on the Domain festival since 1983, and the first Carols by Candlelight festival in Adelaide took place in 2012.

Singing Six White Boomers is a funny Australian Christmas tradition that has nothing to do with people born during the baby boom. In Australia, “boomer” is a slang word for male kangaroo.

Six White Boomers tells a story about Santa’s reindeer who couldn’t bear Australian heat and were replaced by six kangaroos.

After delivering all the gifts, six white boomers help a little kangaroo, Joey, find his mother. The song was written in 1960 by Aussie Rolf Harris and American John Brown and has since become an all-time Aussie Christmas favorite.

For this reason, Australian Christmas cards and decorations often depict kangaroos instead of reindeer, and many Australian kids have never heard of Dasher, Dancer, Prancer, Vixen, Comet, Cupid, Donner, Blitzen, and Rudolph.

Aussies also have unique local versions of The 12 Days of Christmas and Jingle Bells, featuring mentions of Australian animals, Christmas BBQ, and other local activities.

For most Americans and Europeans, Christmas is all about sitting near the fire, enjoying traditional foods, and watching the chilly winter weather through the window – but not for Australians.

December is the hottest month in Australia, the equivalent of June or July in the U.S.. Since Australians technically celebrate Christmas in summer, they often host a festive BBQ, whether at the beach, local park, or backyard.

Australians commonly call BBQ “barbie” and serve a variety of meats, salads, and plenty of beer. Australian Christmas BBQ is a fun, heartfelt gathering for the entire family.

Swimming is an integral part of Australian Christmas barbies, whether in a lake, ocean, or creek, and those who can’t get to the water play cricket or football. Overall, Christmas BBQ is not much different from any other BBQ on a hot summer day.

Christmas and beach may seem distant concepts for Americans residing in northern states.

However, Australians believe that no place is better for festive celebrations than the ocean shore. For Australians, spending Christmas at the beach is a staple holiday activity.

Some Aussies spend the day sunbathing and enjoying a cold beer, while others prefer active sports like freediving and flyboarding. Yachting is a popular entertainment for the entire family or a group of friends.

Often, someone will dress up as Santa Claus and walk around the beach, celebrating kids and grown-ups. So, if you ever get on an Australian beach at Christmas time, don’t be surprised to see a Santa surfing the waves.

Like most of the world, Australians exchange gifts for Christmas.

The gift exchange typically occurs between family and friends, but Australians also practice the tradition of sending Christmas cards to distant relatives and acquaintances.

Interestingly, the postage price for a Christmas card is lower than that of a regular letter. Perhaps, such a love for mailing holiday cards is related to the large distances between Australian towns.

Many workplaces and schools host the Secret Santa gift exchange. The tradition requires gathering a group of at least three people who then place their names in a hat or sack. Afterward, everyone pulls out one name and keeps it in secret.

Everyone then must get a gift for the designated recipient. Usually, workplaces and schools set a specific gift budget. People exchange gifts on Christmas Day and try to guess who their Secret Santa is.

Some Australian Christmas foods, such as Christmas pudding and stuffed turkey, were borrowed from the British and Americans. However, most Australian festive foods are genuinely unique.

While Australian Christmas ham and turkey recipes are similar to American, Aussies prefer to eat them cold. Oysters, prawns, and other seafood are an obvious choice for a Christmas beach day.

As for alcohol, mulled wine and eggnog may be a bit too hot for summer, so Australians prefer a cold beer to anything else.

Fresh Pavlova dessert made with meringue and cream and topped with fresh berries is the Australian traditional Christmas dessert and a perfect alternative to heavy cakes. However, some Aussies prefer fresh fruit to sweets.

Like Americans, Australians celebrate Boxing Day on December 26, and attending an annual cricket match known as the Boxing Day Test is the favorite entertainment of locals.

Games are held between Australian cricket teams and opposing international teams in Melbourne.

Cricket has nothing to do with Christmas, but neither do surfing or road trips.

For Australians, the Boxing Day Test is just another fun tradition concluding the festive season. Locals who can’t attend the match either watch it online or shop at Boxing Day sales.

Australian Christmas decorations aren’t much different from British or American, despite the vast distance. The Christmas tree is always in the spotlight, decorated with tinsel, string lights, and baubles.

However, many Aussies prefer the Christmas Bush, a small native plant with cream-colored florals that turn red at Christmas time, to traditional firs and spruces.

Australians love to drive around the neighborhood in the evening, watching lights and displays. Some city councils host Christmas decoration competitions, encouraging people to be creative and festive.

One of Australia’s largest Christmas trees is traditionally set up in Sydney, Martin Place. Darling Harbour typically sets up the most unusual Christmas light displays, be it a giant bauble or interactive ice sculpture glowing in rainbow hues.

Melbourne is famous for its Christmas projections on major city buildings like the Melbourne Town Hall and Hammer Hall, and Mandurah hosts annual Christmas Lights Cruises along the canal, decorated with extravagant festive displays.