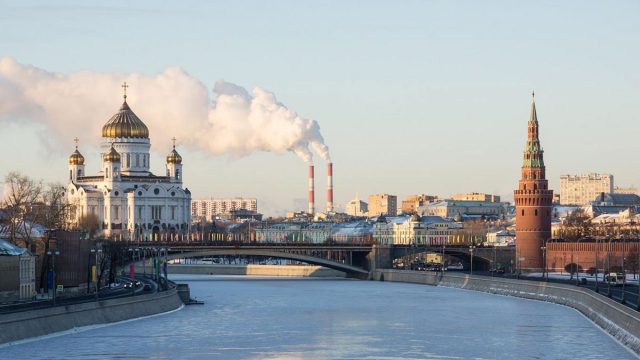 Christmas in Russia is very different from that in the U.S. or Europe. This is mainly related to the prevalence of Orthodox Christianity in the region.

Christmas in Russia wasn’t commercialized like it was in the rest of the world.

The main reason for that is the nearly century-long Soviet rule that banned Christmas entirely.

In the 20th century, the USA was promoting the plump and jolly new image of Santa and producing Christmas movies.

Russians, in turn, had to hide their faith and celebrate Christmas quietly at home.

That’s why most Russian Christmas traditions have remained unchanged since the Middle Ages, and some even since the pagan times.

It’s a solely religious holiday observed only by those truly believing in God.

Unlike European or American Christians, who are mainly Catholics, the majority of Russians are Orthodox Christians.

Therefore, the religious traditions and the dates of Christmas, Easter, and other celebrations differ noticeably between our cultures.

Catholics prepare for the Christmas feast by observing the Advent tradition – we light up a candle every Sunday for four weeks before Christmas Day.

The Nativity Fast lasts for 40 days, from November 28 to January 6. Its purpose is to showcase repentance and solemnity in solidarity with Christ, who died for our sins.

Orthodox strive to get away from physical desires, be it tasty food, alcohol, or other temptations, and lean towards spiritual needs.

In other words, the main focus of the Nativity Fast is on the spiritual facet, not on physical deprivation.

Each day of the Nativity Fast has different rules regarding foods people can or can’t consume.

The Nativity Fast lasts until the first star appears in the sky on the night from January 6 to January 7. It symbolizes Christ himself and the Star of Bethlehem that guided the three Wise Men to Mary and Jesus.

Fortune-telling isn’t exactly a Christmas tradition. It started back in pagan times but was preserved over centuries and is still widely observed in Russian villages, though rarely in large cities like Moscow or Saint Petersburg.

On Christmas Eve (which, as you remember, is on January 6 for Russian Orthodox), young women get together to predict their future – typically, what their husbands will be like or how many children they will have. It’s advised not to wear anything fancy and no makeup.

The house must remain quiet. Usually, they use two mirrors reflecting in each other, creating an endless tunnel. This method is considered the most accurate but also the most dangerous.

They would then say, “My future husband, come to me to have dinner.” The moment someone appears in the mirror, the woman must say, “Get lost!” for the image to disappear.

Other methods include fortune-telling on mugs, rice bowls or asking the first man encountered on the street what their name was. Women believe that this will be the name of their future husband.

While fortune-telling is mainly seen as an outdated custom nowadays, it used to be a big thing up to the 20th century.

You can find mentions of this Christmas tradition in numerous Russian literature pieces, particularly those written by Nikolai Gogol.

Koliada is a sort of Russian trick-or-treating or mumming that can also be found in Gogol’s works.

Perhaps, it’s one of the most mysterious Christmas traditions in the world, along with fortune-telling. It’s also mainly observed in villages.

Koliada involves people disguising in odd, sometimes scary, attires and visiting houses of neighbors, singing and asking for some treats or change in return. You may wonder, what does this have to do with Christmas?

Well, like many other Orthodox Christmas customs, koliada originated in pagan times. The original meaning of the tradition was rather straightforward: if you don’t treat your guests well, you will have a bad year and harvest.

Alright, but why the spooky costumes? Russian authors of the 19th century provide us with a legitimate explanation – the scary costumes were meant to represent dead souls that visit their homes to bless the living.

Some Catholic and Orthodox Christmas traditions are similar, like receiving gifts from Santa. Russian Santa Claus, however, is known as Ded Moroz, translating as Grandfather Frost.

Grandfather Frost rides a sleigh drawn by three horses and is accompanied by his granddaughter Snegurochka (something along the lines of “Snow Girl”).

In fact, Snegurochka is even more popular among Russian kids than Grandfather Frost himself.

Grandfather Frost originates not from Saint Nicholas but rather from a character from the Russian folk tale Morozko. It’s an allegorical figure that covered the water and forests with frost but was nice to people and gave them presents.

But, like Christmas gift-givers in numerous other cultures, Morozko can also be evil to mean and lazy people. Thus, Russian children strive to behave well to please Morozko.

In 1998, a town in the north of Russia, Veliky Ustyug, was marketed as Grandfather Frost’s home by Moscow mayor Yuri Luzhkov. Children across the country write letters and receive answers from Veliky Ustyug to this day.

Christmas pudding and glazed ham are eaten in nearly every country celebrating Christmas, but Russia is different in this sense.

Christmas Eve is known as sochelnik, when Orthodox Christians eat lean meatless food such as porridge with dried fruit or sour cabbage.

Funnily enough, Christmas pudding originated as frumenty – oat porridge with dried fruit. But while in Europe, it morphed into a dessert, in Russia, the recipe remained unchanged.

On Christmas Day, Russians can finally indulge in a celebratory feast.

Olivier salad is made from potatoes, green peas, meat, carrot, pickles, and mayo. It became a real Russian national symbol during the Soviet times, but the recipe originated several centuries earlier.

Like many Catholics, Orthodox Christians attend a Midnight Mass on Christmas Eve. The Mass combines Vespers and Divine Liturgy.

After returning home from church, Russians would prepare a Holy Supper consisting of 12 dishes to honor the 12 Apostles.

The most devoted Orthodox Christians then return to the church to attend the All-Night Vigil and the morning Divine Liturgy. In other words, the most religious Orthodox can easily spend the entire Christmas Eve and Day in church.

In the Soviet Union, Christmas was banned by the atheist government, and celebrations were strictly prohibited.

The holiday was replaced with New Year, which to this day is considered a bigger holiday in large Russian cities or among non-religious people.

In fact, New Year in Russia wasn’t celebrated on December 31 until the Bolsheviks came to power.

The country was following the Gregorian calendar and thus celebrated it on January 13. Today, this day is called The Old New Year and is seen like just another reason to feast.

Of course, Orthodox Christians didn’t forget about their faith so easily and continued to celebrate Christmas in secret. Thankfully, Christmas trees were still standing in most homes from New Year’s celebrations.

Although people preserved the tradition of gathering with family to feast on January 7, they stopped attending church or participating in koliada.

Anything that required going outside posed a risk. This situation is quite similar to that in Britain during the Protestant Reformation.

However, people could safely attend church and participate in celebrations since 1991.

The Story/Myth of Babushka

A popular Russian Christmas legend mentioned in numerous sources online is the story of Babushka, translating as Grandmother. According to the legend, Babushka was a hardworking woman living in a small village.

One evening, she heard villagers shouting that they saw a new star appear in the sky. But she missed the star since she was too busy working. Suddenly, she heard knocking on her door.

At her doorstep stood three kings, known as the Three Wise Men, who asked her for a place to rest. She obliged and offered them plenty of food.

She then asked the three kings where they were going – you likely already know the answer. They told her the story of the Star of Bethlehem. The Magi suggested she come with them, but she didn’t know what to bring as a gift.

Long story short, the three kings were gone, and Babushka went to search for them the next day. She allegedly found the stable where Jesus was born, although Russia and Bethlehem aren’t all that close.

But Mary and Joseph were already gone to Egypt, and the Babushka is still searching for Jesus. That’s a rather odd nativity story, not solely in terms of geographical and historical discrepancies.

The truth is, no Russian has ever heard of this legend. It’s just a myth that appeared on the web and was popularized by those unfamiliar with Russian Christmas traditions.

So, if you ever meet a Russian, don’t tell them the story of Babushka unless you want to laugh together!