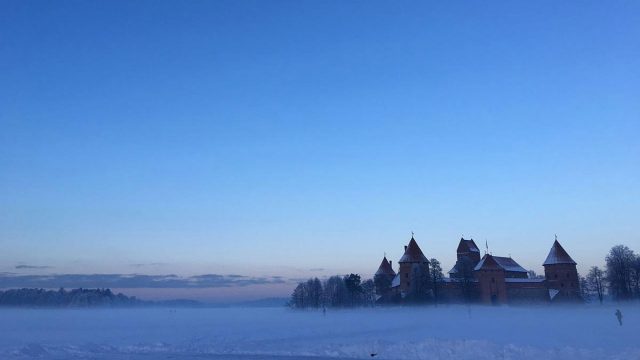 Christmas in Lithuania is the most important holiday of the year because the nation is prevalently Christian.

Most Lithuanian Christmas traditions are universal for all denominations and regions, but some have pagan roots and are unique to the region.

Christmas is a quiet time of family gatherings. The streets of Lithuanian towns are empty from December 24 to December 26 as people spend quality time with their loved ones.

However, Lithuanians are happy to invite their friends and neighbors for a Christmas feast if they have nowhere else to go because it’s a very hospitable nation.

Before decorating the house, Lithuanians clean it thoroughly to ensure they have a fresh start to the year.

Locals change their regular linens for white ones with ornate lace or something with a festive print. The liturgical color white represents purity.

Lithuania is famous for its linen fabric production, so linen tablecloths are very popular. Many Lithuanians place some straw on the Christmas table, symbolizing the humble manger Jesus laid in.

Of course, Lithuanians also decorate Christmas trees. Faux trees aren’t in favor of Lithuanians because the country has plenty of forests, and everyone can get a natural, fragrant fir.

Lithuanians decorate the Christmas tree on December 24, Christmas Eve. Some people decorate their trees on one of Advent Sundays, but never in November like Americans.

Christmas tree ornaments include stars, angels, baubles, snowflakes, snowmen, and geometric figures made from straw. Such straw ornaments are known as himmeli and are also widespread in Scandinavia, Latvia, and Estonia.

Lithuanians rarely decorate their house exterior because many locals live in micro-districts with multi-story apartment buildings. However, public places are always decorated with holiday figures, garlands, and fairy lights.

Many Lithuanians hang Advent wreaths on their door or above the fireplace. Some place a wreath on the table to use as a candleholder. The wreath is usually made from natural evergreen branches adorned with nuts, fruits, and berries.

Most Lithuanian Christmas food is unique to the region, but some recipes were adopted from Poland, Russia, or Scandinavia.

Lithuania has a low percentage of Orthodox population compared to other Baltic states, but even Catholic Lithuanians prefer to fast on Christmas Eve until night arrives.

Lithuanians can start the Christmas feast only when the first star appears in the sky. If the sky is cloudy, the decision on when to begin the celebrations is up to the oldest family member.

The recipe originated in Soviet Era, where it was known as “herring under a fur coat” because herring is the first layer and veggies create a “coat.”

Some Lithuanians make fish soup or bake an entire carp or salmon. Potatoes, mashed, boiled, baked, or fried, are the traditional side dish, always topped with sour cream and dill.

A tiny yet quintessential element of Lithuanian Christmas celebrations is cookies called Kūčiukas, made with yeast batter and poppy seeds. People traditionally eat them with milk like cereal.

No Christmas is complete without Šakotis. This tall sugary dessert resembling a Christmas tree is an all-time Lithuanian cuisine staple, eaten year-round despite its similarity to one of the main Christmas symbols.

Another Lithuanian Christmas dessert is Meduolis, a soft cake with cinnamon, cloves, honey, and orange zest. It resembles Christmas pudding but is lighter in texture and doesn’t contain spirits.

On Christmas Day, Lithuanians can allow some meat and cook Kugelis – a dish with grated potatoes, eggs, bacon, and sour cream baked in the oven. This dish is perfect for long, cold winter days.

Everyone is expected to try the main dish; otherwise, their year will be unlucky. Lithuanians also can’t leave the table before everyone has finished eating, or the family would not gather the following year.

Kids believe in magic; everyone knows that. However, at Christmas time, adult Lithuanians join children and get involved in spells and fortune-telling.

The practice of fortune-telling during the winter solstice period has pagan roots and is also observed in other Baltic countries.

Lithuanian women try to find out who their future husbands will be and whether they will have a lucky year. Some rituals allegedly show who will die the following year and who will get married or have a baby.

Single ladies go outside and pick up a few branches of kindling wood. If they get an even number, they will soon get married.

One Lithuanian Christmas superstition is related to the traditional straw table decoration. If someone pulls out a long straw from under the tablecloth, they will live a long and happy life. But if the straw is short, their life will be short, too.

Lithuanian kids believe that once the clock strikes midnight, animals acquire the ability to speak like humans, so don’t be surprised if you see a Lithuanian kid talking to their cat or dog.

Despite a different name, Lithuanian Santa is very much like American Santa. He also originated from Saint Nicholas from Myra, who became a saint for his good deeds and is a patron of children and sailors.

He leaves the gifts under the Christmas tree – Christmas stockings aren’t popular in Lithuania. That’s great for kids because they can get large gifts that wouldn’t fit into a stocking.

Children don’t leave cookies and milk out for Santa but may recite a poem or sing a carol to please the Christmas gift-giver.

Lithuanians prefer to spend their Christmas Day watching Christmas movies with the family.

Some Lithuanians visit their neighbors and friends to exchange greetings and small gifts. They play joyous games and sing Christmas carols.

When evening arrives, local musicians go out to the streets and sing hymns, signaling the end of the Advent season.

Lithuanians sing folk songs rather than popular Christmas hymns like Silent Night and The Twelve Days of Christmas, usually dressed in native costumes.

The Midnight Mass tradition originated in the fourth century in Israel. It arrived in Europe in the fifth century when a woman Egeria traveled to the Holy Land and observed the ritual.

Lithuanians, too, attend the Midnight Mass on Christmas Eve, and some also go to church on Christmas morning. However, most Lithuanians prefer to sleep after late-night celebrations.

The largest Midnight Mass in Lithuania takes place in the Cathedral Basilica of St Stanislaus of Vilnius. The cathedral was built in the late 18th century.

However, this cathedral isn’t the only one worth your attention if you visit Lithuania at Christmas. Vilnius also has a beautiful St. John’s Church. If you’re ever in Panevezys, visit St. Peter and Paul’s Church.

On Christmas Eve, after cooking for the family feast and decorating the Christmas tree, all Lithuanians take a bath. Washing oneself before festivities may not seem unique, but in Lithuania, it’s a whole ritual.

People make a fragrant bubble bath and relax, cleansing their minds from negative thoughts. Then, they put on new festive clothes. Lithuanians believe that the bathing ritual would help them stay healthy the following year.

Some Lithuanians go to a sauna instead of taking a bath. A sauna is a sacred place for all Balts and Scandinavians. Lithuanians usually go to steam saunas, where they get slapped by bath brooms from oak twigs.

The traditional Lithuanian sauna isn’t too hot, usually about 60 degrees Celsius, but some like it hotter and continuously pour water on hot stones to raise the temperature. If Christmas is snowy, Lithuanians jump into ice-cold water after the sauna.

Lithuanians still honor their native traditions stemming from pagan times. Back in the day, Lithuanians celebrated the winter solstice festival in late December.

People believed that long winter nights were a time to connect with the dead and engage in various rituals.

Welcome to Christmas Lyn. Since I was a kid, I’ve always been fascinated by Christmas traditions. I share all I know about Christmas on this website, as a Christmas enthusiast.
Topics
Recent Articles