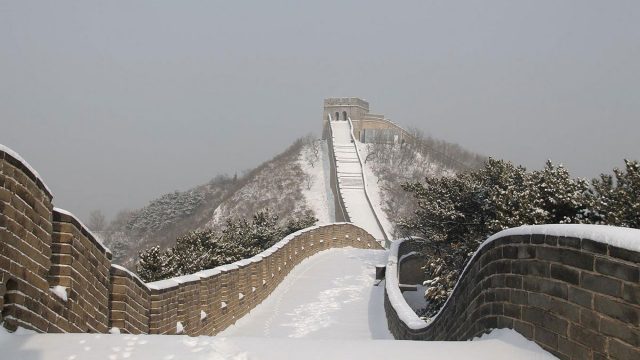 “Christmas in China” may sound odd for many Americans, and that’s no wonder. After all, the portion of the Christian population in China is only about 5%.

Indeed, the Chinese perceive Christmas as sort of Saint Patrick’s or Valentine’s Day rather than a religious occasion.

For this reason, you won’t come across any Nativity Scenes, Advent wreaths, or Midnight Masses in China. In fact, public expression of Christian faith in the region is shunned.

Despite the lack of religious context, Christmas has more connections with China than you may imagine.

The country is the largest manufacturer of holiday decorations in the world, and Santa has a residency near a northern town Mohe.

Overall, Christmas celebrations in China are lighthearted and fun. Locals are very creative with activities and prefer to spend the season with their loved ones, just like Americans or Europeans.

The Chinese don’t really follow Western Christmas traditions but observe some unique local practices. So, the most notable Chinese Christmas custom is gifting an apple wrapped in cellophane or colorful paper to friends.

The apples are called Peace Apples. Some may see a religious connection here, thinking of Adam and Eve’s story. However, the real origin of Peace Apples is much simpler.

Christmas Eve translates to Mandarin as “ping’an ye,” which means “peaceful night.” The Mandarin word for apple, in turn, is “ping guo.”

Since the words are very similar in pronunciation and the Chinese are fond of their homophones, they came up with the tradition.

Eating a Peace Apple on Christmas Eve is believed to bless you with a peaceful and safe year. Therefore, the apples sold in Chinese Christmas markets and shopping malls often feature wishes, short messages, or images.

Some Peace Apples are decorated no worse than Christmas tree ornaments. They may be painted in green or gold, depicting elaborate scenes with Santa and other holiday characters.

In some regions of China, people believe that you can’t just buy a Peace Apple from the store. It’s supposed to showcase how much you care about the gift receiver, so you should beg for it (not from the store owner, of course).

People must ask 24 friends, all with different last names, for one jiao coin each. Why 24, you may ask? The most likely explanation is that the lunar calendar contains 24 solar terms comprising a whole year.

In the Western world, Santa is a traditional gift-giving figure inspired by Saint Nicholas, a monk from Myra. But in China, he’s more of a holiday spirit bringer meant to enhance the atmosphere.

The Chinese don’t draw connections between Santa Claus and his origin. The local plump and jolly, white-bearded Santa in a red suit replicates one from Coca-Cola’s advertisement rather than any of his predecessors.

If you ever come to China at Christmas time, you’ll notice that many Santas displayed in stores and on city streets hold saxophones.

This may seem confusing to Americans and Europeans since Saint Nicholas certainly didn’t play the saxophone – the instrument was invented only in the 19th century, 1500 years after the real Santa’s death.

However, the custom has an explanation. Each Chinese cultural event, be it a wedding, funeral, or festival, is accompanied by music. The saxophone is among the most popular musical instruments in China, apparently.

Another thing you likely didn’t know about Santa is that he has sisters. They all reside in China and help Santa prepare gifts for children.

Nobody knows whether the costumed women accompanying Santa are his blood sisters or just an alternative to elves, though.

One thing we know for sure – Santa has residencies all over the Northern part of the globe. Apart from Lapland and Great Ustyug, Santa has purchased a home in China’s North Pole.

The Arctic Christmas Village theme park is set up in the countryside outside a northern city Mohe.

Chinese Christmas traditions may be very different from those in the rest of the world, but we all share one thing – the love for holiday food. Like Americans, the Chinese ditch their diets on Christmas and indulge in a savory feast.

Chinese Christmas dinner can be held both on December 24 or December 25. The Chinese don’t limit the guest list to their family members and often go out with friends instead of staying home.

Christmas in China isn’t considered a solely family holiday. Young people see it as a reason to gather with friends or go on a date with their loved ones.

Consequently, going to church isn’t even in the top-10 Chinese Christmas activities.

Instead, the Chinese prefer to go shopping or ice skating, visit karaoke, or go to bars. Stores see this as an advantage to hold big sales and events, sharing the holiday spirit through great bargains.

In major cities such as Hong Kong, Shanghai, Beijing, and Macau, which are more influenced by European culture, you can encounter more traditional Christmas celebrations.

Every year, the Beijing Concert Hall hosts a large concert of Christmas carols.

The carols are performed by multiple choirs, often involving kids. Most of them are well-known to any American, such as Silent Night, Jingle Bells, Santa Claus Is Coming to Town, and O Come, All ye Faithful.

Although churches are seen mainly as cultural heritage landmarks, such services are popular among locals of all denominations.

Chinese cities are famous for their nightlife, but it isn’t limited to clubbing. For instance, the Xintiandi entertainment center in Shanghai hosts jazz concerts every year on December 19.

Sports enthusiasts visiting China at Christmas time can head skiing to one of the Chinese resorts.

The region is known for its beautiful snow-covered mountains. Some of the best skiing resorts in China are situated in Beidahu, Huaibei, and Yabuli.

Harbin is a unique place in China known as the Oriental Moscow, featuring a magical blend of Chinese and Western cultures. Every year, the town hosts an Ice and Snow Festival, where you can see astonishing Christmas sculptures.

Overall, the Chinese never cease to come up with new unique entertainments for locals and tourists at Christmas time.

While often unrelated to this holiday’s meaning, Chinese performances, exhibitions, and festivals are always highly entertaining.

Christmas in China resembles Valentine’s Day more than a religious celebration. But instead of hearts, shopping malls and streets are filled with snowmen, snowflakes, reindeer, Santa, and other Christmas symbols.

If American Christmas decorations don’t amaze you anymore, consider visiting China. The Chinese are extremely creative – for instance, a shopping mall in Hong Kong once built a 30-foot Christmas tree from LEGO.

Most Christmas decorations in China are displayed in public places rather than in people’s homes. The Chinese typically opt for a small Christmas tree or poinsettia and don’t set up any religious decorations such as the Nativity Scene.

Stores, cafes, and other public places, in turn, often leave the decorations until late February. You may even hear Christmas songs playing in July, which some Chinese aren’t really fond of.

Interestingly, most of the world’s Christmas decorations are made in China. Everyone knows how developed the country’s manufacturing industry is, but not many of us think of it when we decorate the Christmas tree.

So, the town Yiwu is known as China’s Christmas village – not because it’s the home for Santa Claus, but because it reportedly produces about 60% of all Christmas decorations worldwide. And, believe it or not, over 30% of the export goes to the USA.

Despite such elaborate celebrations, there’s a real war on Christmas going on in China. Many people consider Christmas to be a tool of foreign imperialism and a threat to Chinese cultural heritage.

This opinion is justifiable since only about 1% of China’s population celebrates Christmas in a religious way.

Sometimes, people come out on protests against Christmas celebrations, clashing with those supporting any excuse to have some fun.

The estimated portion of the Chinese population against Christmas celebrations is only about 5%.

Even those who don’t participate in festivities tend to view them as a great way to attract tourists and earn more money for the country’s needs.

Still, some restrictions apply to all Chinese during the Christmas season. For instance, Chinese Christians can’t pray or sing religious songs in public to avoid triggering confrontations.