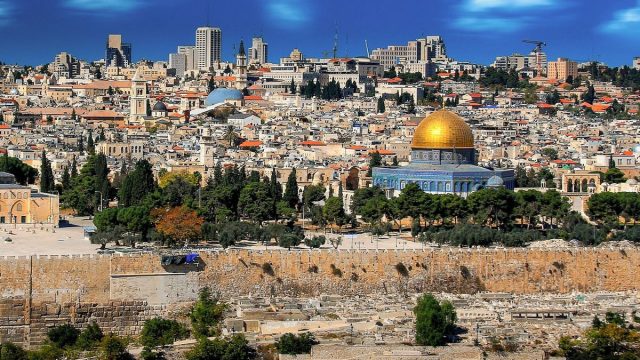 Christmas in Israel isn’t a widely celebrated holiday, although the nativity story took place on its lands.

Only 2% of Israel’s population are Christians, so Christmas isn’t even a public holiday in most regions of the country.

For this reason, you’re unlikely to see a lot of Christmas decorations if you walk in residential neighborhoods, but major landmarks are always beaming the festive spirit.

Of course, many Christians want to celebrate the most important holiday of the year in the Holy Land, so Nazareth and Bethlehem churches are always packed on Christmas Eve.

However, the best places to celebrate Christmas in Israel aren’t limited to towns from the nativity story. Contemporary Tel Aviv and diverse Haifa are also worth visiting during the holiday season.

Israelis are blessed to live in the same land where the nativity story took place, so many locals visit Bethlehem, where Jesus was born in a stable, and Nazareth, his childhood town, on Christmas.

In Luke, Mary and Joseph were forced to travel from Nazareth to Bethlehem under an imperial command to return to their ancestral town because of the census.

Nowadays, Bethlehem is under the control of the Palestinian National Authority, but it doesn’t mean that Israelis can’t visit it for Christmas.

Walking from Jerusalem to Bethlehem is among the favorite Israeli Christmas traditions. The walk takes hardly two hours on foot, and all one needs to take along is a passport.

Israelis typically visit the Greek Orthodox Church of Annunciation in Nazareth, where the largest Midnight Mass in Israel is held. The church was established in the Byzantine era but had to be rebuilt in the 18th century.

Under the church is an underground spring. According to Eastern Orthodox Christians, Virgin Mary, Jesus’ mother, was fetching water from that spring when Angel Gabriel appeared and announced that she was carrying the Christian Messiah.

Bible lacks details that would help us identify the precise location of the spring, but at the time the church was built, that spring was the only water source in the town.

Christmas markets in Tel-Aviv, Jerusalem, Nazareth, and other major Israeli towns are a must-see for tourists visiting the Holy Land in late December. Christmas market in Nazareth takes place at Mary’s Well Square, next to the Greek Orthodox St. Gabriel Church.

On Christmas Eve, the Nazareth Christmas market visitors can witness a festive parade with traditional hymn singing and participate in the largest Midnight Mass in the country.

Jerusalem’s Christmas market takes place in front of the YMCA Hotel and on the YMCA historic basketball court. The stalls are in heated tents, so winter weather won’t ruin anyone’s plans for the night.

Although Christmas markets in Israel can’t compete with German or Austrian markets in size, they are equally atmospheric, offering a wide selection of handmade ornaments, gifts, arts, treats, and drinks in cozy wooden stalls.

Haifa is another popular place to celebrate Christmas in Israel. Every year, from December 2 to December 18, the city hosts the Holiday of Holidays, marking the tolerance and unity of Judaism, Islam, and Christianity in Israel.

Israel is a diverse country that blends many cultures, so local people have to co-exist in peace. In December, when Christians celebrate Christmas, Muslims – Ramadan, and Hebrews – Hanukkah, Israeli town streets are filled with decorations and songs of each religion.

Festival visitors can shop antique fairs and arts and crafts of local artisans, witness circus performances, listen to live music, enjoy festive food of different cultures, and dance. The event encourages people from different backgrounds to respect each other and party together.

Haifa’s town council has been hosting the festival for nearly three decades. Since 2018, it has been taking place in German Colony, between the Haifa Port and Bahai Temple.

However, some festival events are scattered across the city – exhibitions and performances take place in Haifa Art Museum, Haifa City Museum, The Studio Theater, The Tikotin Japanese Museum, and The Rappaport Center.

Christmas food in Israel is diverse because people have different cultural backgrounds. However, a roast lamb leg or, sometimes, whole lamb is a must at the Israeli Christmas dinner, served with rice or potatoes.

Ham and poultry aren’t particularly popular in Israel, but some families serve stuffed chicken because it’s more affordable and easier to make. Perhaps, Israelis adopted the tradition from the west. Many locals cook vine leaves stuffed with mince and rice.

Israelis don’t have a Christmas cake as Americans do. Instead, they serve a variety of traditional desserts, including baklava, date rolls, marble halvah, and almond stuffed dates.

Christmas markets in Israel are all about street food. Falafel can be deservedly considered Israel’s national dish, usually stuffed in pitta bread with fresh tomatoes and fried aubergines. Hummus is the second-most popular dish in Israel.

While westerners tend to perceive hummus as a dip, in Israel, it can play any role and even be the main entrée. The basic hummus recipe contains chickpeas, lemon, tahini, and garlic, but many locals invent their unique ingredient combos.

Despite being a Georgian dish, khachapuri is favored by many Israelis. This boat-shaped bread with egg and cheese is simple yet delicious. A must-try Israeli traditional dish is shakshuka, tomato sauce with poached eggs, pepper, onion, and cumin. It pairs perfectly with khachapuri!

When it comes to drinks, Israelis prefer sachlav, a drink similar to eggnog made with milk, cornstarch, sugar, vanilla, cinnamon, chopped nuts, coconut, and a spirit of choice. Some locals prefer the non-alcoholic version.

December is the peak tourism season in Israel as Christians from all over the world want to visit the Holy Land and attend the Midnight Mass in Nazareth. Many people go on organized tours to important places from the Bible.

In contrast, many Israelis go abroad in December, particularly non-Christians, because the cities become too crowded.

Tel Aviv, located on the Mediterranean coastline, is among the most populous and the youngest city in Israel. The city is considered the heart of Israel’s nightlife, offering locals and tourists various activities for any preference.

However, Christmas parties in Tel Aviv can’t compete with New Year events that bring Israelis of all religious backgrounds together.

Like most Christians, Israelis attend the Midnight Mass on Christmas Eve. The church attendance rate in Israeli towns on Christmas is immensely high, which can be explained by locals’ appreciation of the land’s role in the nativity story.

The Midnight Mass begins close to midnight, but many churches in Israel hold Christmas services all day long.

In Jerusalem’s Old City, people take the Via Dolorosa processional route, carrying a large cross of Christ on their shoulders, adding authenticity to Christmas celebrations. This route represents Jesus’ path on his way to crucifixion.

For most Israelis, Christmas is just an ordinary day, so many people don’t decorate their homes. Still, decorations on Israel town streets are abundant.

The dates of Christmas and Hanukkah overlap, so even if the decorations aren’t Christmas-themed, everyone senses a festive spirit in the air.

Christians in Israel put up Christmas trees in their homes and adorn them with baubles, tinsel, string lights, and ornaments with Christmas symbols, including stars, bells, reindeer, angels, and crosses.

Many people set up nativity scenes in their homes, featuring Mary, Joseph, infant Jesus in his crib, and the shepherds who came to witness the miracle of Christ’s birth. Some Israelis make nativity scenes themselves, but most people buy them at Christmas markets.

People in Israel don’t typically decorate their house exterior for Christmas because it would make their house stand out too much.

Santa Claus in Israel isn’t much different from Santa in the U.S. He wears a red fur-trimmed suit, has a long white beard, and plump, rosy cheeks. However, he doesn’t enter houses through the chimney and doesn’t eat cookies with milk.

Israeli Santa Claus leaves gifts for children under the Christmas tree. Jerusalem has an official Santa – Issa Kassissieh, a former basketball player who rides a camel instead of a sleigh pulled by reindeer.

He has been the official Jerusalem Santa for well over a decade. Jerusalem locals and visitors can meet Santa on St. Peter Street in the Old City and participate in the toy workshop.