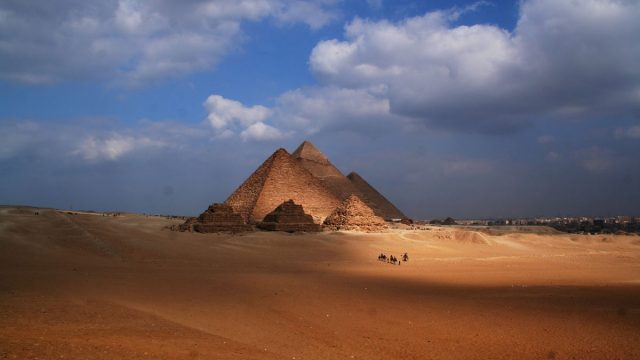 Christmas in Egypt isn’t a universally accepted yet very significant holiday, given the region’s role in the nativity story.

Nowadays, Christians account for approximately 10% of the country’s population and are constantly dealing with discrimination, but it doesn’t stop them from celebrating Christmas.

The flight into Egypt is the final episode of the nativity story. When the Magi warned Mary and Joseph about King Herod’s plan to kill Jesus, they sought asylum in Egypt.

For Egyptians, Christmas is the time of worship and penance leading to joyous celebrations abundant with delicious food in a family circle.

Like most Christians, Egyptians exchange gifts and decorate their homes for Christmas, but some local customs are peculiar to the region.

Egyptian Christians belong to the Coptic Orthodox Church, the same as Christians in Libya, Sudan, and the Middle East. For this reason, they don’t celebrate Christmas on December 25 like Catholics and Protestants do but on January 7.

The history of Christianity in the region is twisted – from the 7th century, the treatment of local Christians by Islamic conquerors ranged from barely tolerant to openly hostile.

Constant religious discrimination could explain why the Coptic Orthodox Church didn’t accept the calendar reform introduced by Pope Gregory Xlll in the 16th century – they had more important things to worry about.

The Catholic Church instantly acknowledged the changes and began celebrating holidays by the new calendar. However, the calendar reform didn’t have the same success in the Orthodox Church.

Interestingly, Christmas in Egypt gathers Christians and Muslims together despite religious disagreements because Muslims perceive January 7 as the beginning of the New Year by the Julian calendar.

Both Advent and Nativity Fast are dedicated to penance and hopeful anticipation of Jesus’ birth. But while Catholics light candles on an Advent wreath and read prayers, Orthodox Christians observe a strict 43-day fast.

Nativity Fast in Egypt starts on November 25 and lasts until January 6 evening, until the first star appears in the sky. Simply put, Egyptians become vegans for 43 days because they shouldn’t eat dairy, eggs, meat, or fish.

People also shouldn’t smoke, drink alcohol, or otherwise indulge in their bad habits. However, on some days, they can drink a bit of wine and eat fish with oil. Most importantly, they should free their minds from sinful thoughts.

The most devoted people don’t eat anything until night arrives on Christmas Eve because it’s the strictest day of the fast.

Everyone who has ever tried observing a strict diet and giving up all their bad habits at once knows how challenging it is, even in the name of Christ. No wonder the Christmas feast is the most anticipated event of the season!

Myra was located on the territory of modern-day Turkey, which is relatively close to Egypt. It’s easy to see why Egyptians were among the first to hear about Saint Nicholas’s good deeds and declare him the spirit of Christmas.

Egyptian Santa Claus wears a traditional red suit with white fur trims, familiar to any American kid, despite the Egyptian heat. He has a long white beard and often wears round glasses.

However, Santa Claus in Egypt doesn’t ride a sleigh pulled by eight (or nine? Let’s not forget about Rudolph!) reindeer because the Egyptian climate isn’t favorable for these majestic animals.

Instead, he rides a camel, arguably the most important animal in the region. In ancient times, locals were highly dependent on camels for transportation, food, and milk, and even nowadays, the number of camels in Egypt exceeds 95,000.

And since Egyptians don’t typically have fireplaces, Egyptian Santa Claus doesn’t slip into the house through the chimney but quietly enters through the window. Kids don’t usually leave out food for Santa, but some crack the window open to ensure he can enter.

However, Egyptian kids don’t usually receive large gifts for Christmas because gifts aren’t the holiday’s focus. They typically get treats or some money to buy chocolates.

Like most Christians, Egyptians attend the Midnight Mass, a liturgy commemorating the birth of Christ, on Christmas Eve. The liturgy typically starts at 10.30 p.m. and continues until midnight.

All Orthodox churches in Egypt are relatively recent because old churches were destroyed under the rule of Qalawun in the 13th century. Saint Mark’s Coptic Orthodox Cathedral was only built in the 1960s.

The cathedral has a capacity of 5,000 worshippers and is a notable example of a Coptic architectural style.

On January 6 evening, Egyptians gather with family after the Midnight Mass for a traditional feast that can go on until early morning. People tell stories about the past year, wish each other well, and listen to holiday music.

Many Orthodox Christians refrain from meat on Christmas Eve because it’s too heavy for the stomach after a long Nativity Fast, but Egyptians are an exception. Egyptian Christmas food is primarily based on meat.

Fattah, a traditional Egyptian Christmas dish, is always in the spotlight of the festive table. The dish is made with rice and meat, typically beef or lamb, with a sauce similar to marinara. Each family alters the recipe to their preference.

Poultry rarely gets a spot on the Egyptian Christmas feast known as Fata. Egyptians prefer red meat dishes to chicken, turkey, or goose. Many families serve orzo-beef bones soup before solid meals to prepare the stomach.

An unusual Egyptian Christmas dish is Warak Enab, grape leaves stuffed with rice and meat, although the filling may vary.

The culture of drinking alcohol isn’t particularly developed in Egypt, considering the country’s Muslim influence, so local Christians favor western recipes such as mulled wine and eggnog. However, Egypt has excellent craft beer and wine that match perfectly with red meat dishes.

Traditional Egyptian Kahk cookies are a must on the Christmas feast. Egyptian children love to bake Kahk with their parents, the same as kids in the U.S. anticipate baking gingerbread.

Kahk is essentially shortbread cakes on yeast dough with an addition of cinnamon, ghee, and sugar. They can be shaped as rounds, stars, hearts, or anything else, always generously sprinkled with sugar powder.

Traditional Kahk has sesame seeds, pistachio, and honey filling. However, some people modify the recipe by replacing nuts and seeds with dried fruit, jam, custard, or anything else, and others make plain Kahk without any add-ons.

Another popular Egyptian Christmas dessert is coconut balls with a crispy coating and pepper cakes that resemble soft gingerbread biscuits.

Egyptians used to decorate evergreen conifers to celebrate the winter solstice since ancient times, long before Christianity took over paganism. Back in the day, Egyptian land was teeming with trees, mostly planted by pharaohs and brought from Sudan and Syria.

Parallelly with Egyptians, pagans in other regions also incorporated evergreen plants into their winter solstice celebrations. Over time, this practice morphed into the tradition of decorating evergreen trees for Christmas.

Nowadays, Egyptian land isn’t as rich in trees, but some evergreens are grown in natural reserves, specifically for Christmas. Some people put up faux trees.

Egyptian town streets at Christmas time are adorned with lights and beautiful holiday displays, and public places usually put up large Christmas trees. However, residential neighborhoods are not as festive as in the U.S., given the low percentage of the Christian population.

Some Egyptians give each other gifts for Christmas, but the tradition is prevalent on New Year’s. Gift-giving isn’t widespread among Orthodox Christians, so many people only give presents to children.

The most common gift among Coptic Orthodox Egyptians is money. However, Egyptian etiquette states that one should bring a gift if they’re invited to an Egyptian family for dinner.

So, although immediate family members may not exchange gifts, if they invite an extended family member, the guests are expected to bring something inexpensive like wine or sweets and something for the children.