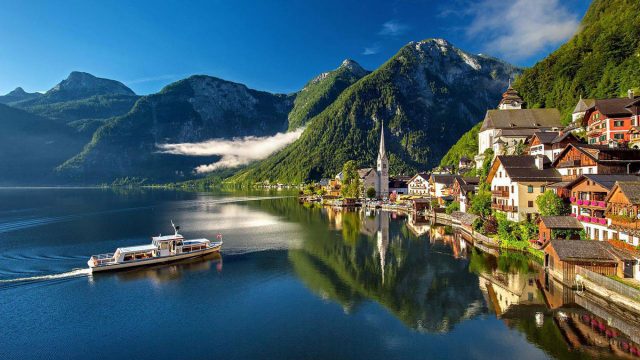 Austria adopted many Christmas traditions from neighboring Germany, but some customs are one-of-a-kind, unseen anywhere else.

Austria at Christmas time resembles a fairy tale, but some festive practices in Alpine towns may seem bizarre and terrifying to tourists.

Overall, Austria is a must-have for a December trip, being a mecca of the European culture and the motherland of many unique Christmas traditions.

Festive dinner is a vital element of any Christmas celebration, regardless of the region, yet the food varies.

Stuffed Christmas goose takes a lot of work but is always worth the effort. As for desserts, Austrians have a unique version of fruitcake called Stollen, made with dried fruit, marzipan, and alcohol and topped with sugar powder.

Every Christmas market sells spiced biscuits with cloves and cinnamon, and for many families, gingerbread baking is the favorite holiday activity.

Of course, no drink tastes better on a cold December night than mulled wine, known as glühwein in Austria. The beverage is traditionally made with wine, cinnamon, cloves, dried orange, and some sugar, but the recipe variations are endless.

Christmas markets are integral to the holiday atmosphere in Austria. The tradition of setting up chalets with festive food and decorations dates back to the 13th century in Vienna and has since spread around entire Europe.

Nowadays, Christmas markets in Austria are much more elaborate and impressive than they used to be centuries ago but carry the same merry feel. Market visitors can find anything from Christmas cards and glass baubles to gingerbread and mulled wine.

Of course, the largest Christmas market in Austria is in Vienna, known as Christkindlmarkt by the name of Austria’s traditional gift-giver Christkindl. The market is situated in front of a neo-gothic Town Hall.

However, it isn’t the only notable market in Vienna. Other must-visit places include the Baroque Belvedere Palace, Schloss Schönbrunn Palace, and Karlsplatz Square near the Karlskirche.

Salzburg, the hometown of Wolfgang Mozart, is also famous for its magical Christmas markets. Innsbruck’s Christmas market visitors will be amazed by the picturesque scenery of the Alps, and the market in less touristy Gratz may be the coziest and quietest yet not less noteworthy.

Many Europeans attend a midnight church service on Christmas Eve, and Austrians aren’t an exception. Attending the Midnight Mass may be the oldest Christmas tradition still observed, dating back to the 430 in Rome.

True to its name, the Midnight Mass traditionally begins at midnight, commemorating the birth of Christ. However, many Austrian churches nowadays start the service at 10 p.m. to let people get home earlier and celebrate with family.

The Saint Stephen’s Cathedral in Vienna is an important landmark and the most famous church in Austria, attended by hundreds of people every Christmas Eve.

Interestingly, the cathedral has the largest bell in Europe, and its ringing can be heard in the entire city.

Other gorgeous churches to visit for the Midnight Mass are Saint Charles Church, situated on the northern side of the Alps, and Franciscan Church in Salzburg, a notable example of baroque architecture.

Carling is a popular Christmas tradition originating from the pagan custom of wassailing in Britain. However, modern caroling has nothing to do with worshipping the spirits of cider trees in orchards.

Kids and adults all over Europe, including Austria, go from house to house singing holiday songs to share the Christmas spirit.

Naturally, the most popular carol in Austria is Silent Night, written in the 19th century in Oberndorf, a small town near Saltsburg.

The song was initially written in German and was called Stille Nacht, Heilige Nacht, but nowadays, it’s translated to over 140 languages.

A lesser-known worldwide yet commonly sung in Austria carol is Es Wird Schon Glei Dumpa, translating as “it’s getting dark,” and written in 1884. However, the melody was composed even earlier, in the 17th century.

On the first Sunday of Advent, every Austrian family lights up a candle in an Advent wreath, marking the beginning of the Christmas season.

The wreath was initially made from evergreen branches, but modern tradition allows creative wreaths from wood and other materials.

Back in the day, three candles in the Advent wreath were lilac, and one was pink, but these days, all candles are typically red or white. Each candle has a special meaning: hope, love, joy, and peace.

The custom of lighting a candle each Sunday before Christmas is a long-standing one, but the practice of placing them in a wreath was introduced by German pastor Johann Wincher in the 19th century.

Austria, being a German-speaking country, was one of the first to adopt the tradition.

Another related yet simultaneously distant tradition is the Advent calendar. Unlike Advent wreaths, it doesn’t have deep religious significance despite the name.

Typically, Advent calendars feature 24 gifts hidden behind paper “doors,” one for each day of the Advent season. The gifts may be sweets, makeup, toys, or anything else, and they are especially favored by kids.

The traditional Christmas gift-giver in Austria varies by region. Some Austrian children believe in Christkindl, a blonde angel child dressed in white and gold. The figure originated in the 16th century in Germany, during Protestant Reformation.

However, many Austrians still prefer the good old Saint Nicholas to Christkindl. December 6 in Austria is celebrated as Saint Nicholas Day or the Feast of Saint Nicholas. Families visit church services, and kids receive gifts.

However, Saint Nicholas doesn’t visit the houses of Austrians alone – he comes along with his evil sidekick Krampus. While Saint Nicholas rewards good kids, Krampus punishes the nasty children with his birch rod.

In some Austrian towns, particularly those surrounding the Alps, people dress up as Krampus on December 5 and roam the streets scaring spectators.

In Austria, the Twelve Days of Christmas are known as Rauhnächte, transiting as “smoke nights.” The period lasts from Christmas Eve to January 6 and incorporates a truly unique, mysterious tradition.

Austrians smoke a mixture of incense, herbs, blaze, and palm branches, at their homes to ward off evil spirits and welcome good fortune and wealth. To purify the room, one must walk around anti-clockwise three times.

The most important Rauhnächte are Saint Thomas Night (December 21), Christmas Eve, Silvester (December 31), and the night before Epiphany (January 5).

Austrians believe that on Saint Thomas Night, one could change their fate and get rid of their burdens.

Christmas Eve is a time of hope and redemption, and the Silvester is a time of new beginnings. The night before Epiphany is the last chance to correct anything that didn’t go well the past year and reconcile one’s feelings.

On the last Rauhnächt, people open all windows in the house to let evil spirits escape and welcome the good spirits in.

Perchten festival is yet another dark Austrian Christmas tradition with pagan roots. People unfamiliar with the custom often confuse Perchten with Krampus due to the beast-like look, but these are entirely different mythological creatures.

Perchten originate from the Alpine folklore and accompany Frau Perchta, a goddess of light, during her Wild Hunt commencing on January 5.

Men in villages located around the Alps dress up as Perchten and walk around, making loud noises, to drive out the devils of winter.

The traditional costumes are genuinely terrifying and realistic, featuring carved horns, handwoven suits, and scary masks. Some costumes can weigh up to 100 kilograms, but Austrians who wear them dance to the sounds of drums regardless.

Nativity Scenes and Other Decorations

Despite the heavy pagan influence of Alpine Christmas customs, central Austria stays true to the religious meaning of the holiday.

If you walk around Vienna, Salzburg, or any other major town at Christmas time, you’ll see numerous ornate, handmade nativity scenes.

The custom of setting up a nativity scene featuring infant Jesus in his crib, Mary, Joseph, shepherds, and farm animals stems from the 13th century in Italy and has since become integral to European culture.

In 1782, Emperor Joseph ll prohibited Austrian churches from displaying nativity scenes, and people began making their own at home. Since that time, nativity scenes have been one of the most important Christmas decorations in Austria.

One unique Austrian Christmas tradition is Barbaratag. On December 4, people cut twigs of cherry trees and place them in a vase at home.

If the twig blossoms on Christmas Eve, the following year is believed to be lucky.