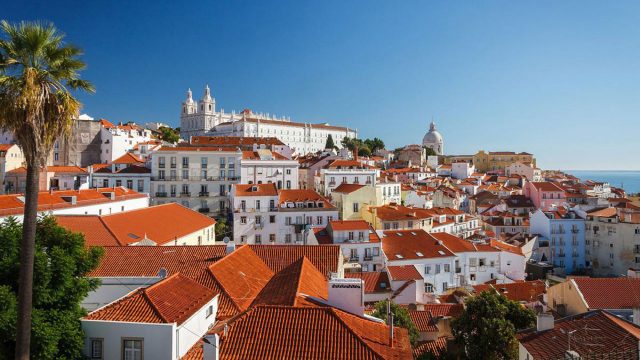 Christmas in Portugal has plenty of unique, sometimes bizarre traditions that never fail to amaze tourists.

Portuguese Christmas celebrations blend Christian, Celtic pagan, and modern customs, and people happily participate in every event regardless of its origin.

Like Americans, the Portuguese decorate the Christmas tree, set up nativity scenes, gather with family for a festive dinner, and go to church – but that’s where the similarities end.

Some customs are limited to specific Portuguese regions, such as the Bananeira, Magusto da Velha, and Caretos de Varge events; others are observed nationwide, like the Madeiros de Natal.

If you ever happen to be in Portugal for Christmas, participate in vibrant celebrations at the main city squares or try traditional Portuguese Christmas food in a local restaurant.

Nativity scenes are the most important Christmas decoration in Portugal, seen in every home and public place, including schools, shopping malls, and concert halls.

The tradition of setting up scenes depicting Mary, Joseph, shepherds, and Jesus in his crib appeared in the 13th century in Italy and has since become widespread in southern and central Europe.

Portuguese people collect moss, stones, and hay to create a realistic backdrop. Live nativity scenes are significantly more common in Portugal than anywhere else. People dress up as biblical characters and portray the nativity story on the streets.

Portugal has some unique Christmas traditions, and one of them is Bananeira. As the name suggests, the tradition involves eating bananas and drinking muscatel at Casa das Bananas in the town of Braga on Christmas Eve.

Muscatel is a type of Portuguese wine made from muscat grapes. A foreigner may see no connection between Christ’s birth and bananas, but the Bananeira tradition has a backstory.

One day around Christmas, the owner of a banana shop in Braga set up a stall with muscatel. A customer asked the shop owner whether he had anything to eat, and the owner gave him a banana.

The store owner’s son was inspired by the story and brought his friends to the store to enjoy bananas with muscatel the following year. The tradition has quickly spread around Braga because who wouldn’t like to drink wine and eat bananas with friends?

Although the custom only appeared a few decades ago, nowadays, hundreds of Portuguese gather to celebrate the Bananeira day every year. Afterward, they head home for a family dinner, already tipsy from the wine.

Mass of The Rooster

Although some Portuguese Christmas customs, like Bananeira, are recent and have nothing to do with the birth of Christ, people haven’t forgotten the real meaning of the celebration. Millions of Portuguese attend the Missa de Galo or Mass of the Rooster every Christmas Eve.

Mass of the Rooster is known as the Midnight Mass in the U.S. because it traditionally takes place around midnight. Attending church services at night is one of the oldest Christmas customs dating to the fourth century.

Portuguese people can appreciate elaborate nativity scenes set up in every local church during the Midnight Mass. When the biblical readings are over, people can come to the altar to kiss the baby Jesus in his crib, an act that’s sometimes accompanied by praying.

The Portuguese tend to be religious, so attending the Rooster Mass is essential for many families. The country is known for its spectacular churches, including the Ermida de Nossa Senhora da Lapa in Geres and Bom Jesus do Monte Shrine in Braga.

Another unique Portuguese Christmas Eve tradition is Madeiros de Natal. People gather at central city squares and other landmarks and burn large bonfires, usually after midnight, when the Midnight Mass is over.

The bonfires are supposed to burn all night, and some people, particularly younger ones, sing and dance around the bonfires until early morning.

Interestingly, the tradition has links with the old pagan celebrations of the winter solstice, when people would make large fires to ward off winter spirits and welcome the sun.

The Christmas Tree & Other Decorations

Like Americans, Portuguese people decorate the Christmas tree, but rarely a real one. Since firs and spruces aren’t native to the region, real trees tend to be expensive, and many people put up plastic trees instead.

People in Portugal also decorate their dinner tables with holly to represent love and hope. Holly has a long history as a sacred plant and was used to heal diseases by pagans.

In the Minho region, people gather on the main city square to see how a bull cart carries a gigantic Christmas tree. The tree is then decorated to the sound of Christmas music while locals dance.

Caretos de Varge tradition has pagan roots and is observed in the town of Varga. UNESCO recognizes the festival as an Intangible Cultural Heritage of Humanity event because it’s one of Portugal’s oldest traditions, counting over 800 years.

The town’s residents dress up in colorful costumes with fringes and handmade leather masks. They carry heavy cowbells on their belts that ring as they move. The idea is to impersonate the devil.

Then, the caretos run around the town, causing mischief, jumping, and screaming. Amidst doing that, they sing traditional songs ridiculing the villagers – but villagers don’t mind it. The festival participants also hit women with their bells, symbolically granting them fertility.

Although Varga is barely inhabited at any other time of the year, during Caretos de Varge, it welcomes thousands of visitors from all over Portugal.

December 26 in many countries is known as the Boxing Day, but not in the Portuguese town of Aldeia Viçosa. The town inhabitants celebrate this day as Magusto da Velha or the Day of Old Lady’s Chestnuts.

The celebration commemorates a wealthy old woman who once donated wine and chestnuts to the locals, asking them to pray for her during the Christmas church service.

On December 26, people climb up the church tower near the main city square and throw chestnuts into the remains of the Christmas bonfire. Then, people eat roasted chestnuts accompanied by wine and share Christmas stories.

Interestingly, people don’t have to buy the chestnuts or wine – the Town Hall sponsors the entire celebration.

The tradition has pagan origins and isn’t related to the birth of Jesus but has become integral to the Portuguese winter holiday season. Janeiras songs usually narrate about the change of seasons and traveling.

In a way, Janeiras singing is similar to caroling – after the performance is over, house owners reward the singers with chestnuts, apples, sausages, or chocolate.

Portuguese kids receive gifts on Christmas Eve from baby Jesus rather than Santa.

Instead of hanging stockings on the fireplace, they lay out their shoes near the window and don’t leave any cookies or milk.

The Portuguese Christmas dinner, known as Consoada, takes place on December 24. The starters are simple – bread, cheese, butter, and olives. Then, the Portuguese serve bacalhau, cod with boiled potatoes, cabbage, and eggs.

Octopus is also common on the Portuguese Christmas table, usually served with potatoes and dill. Roupa velha, translated as “old clothes,” is a dish made from dinner leftovers, including veggies, octopus, fish, eggs, and potatoes stir-fried in oil and garlic.

Portuguese only eat meat on Christmas Day, usually lamb or turkey. Only wealthy Portuguese could afford a turkey in the past, so the dish didn’t become as widespread as a roasted lamb.

For dessert, the Portuguese prefer circular fruitcakes topped with icing and nuts. Traditionally, the cake has a bean hidden inside, and whoever finds the bean is believed to be lucky the following year.

Rabanadas is another Portuguese Christmas dessert – French toast with cinnamon and sugar. The recipe is simple, but rabanadas are delicious regardless.

Sonhos, translated as “dreams,” are fluffy donuts that come in various flavors. Azevias are fried crispy dough cakes with chickpeas and almond filling, topped with sugar powder. Lastly, aletria is a sweet pasta cake made with milk, sugar, and cinnamon.

As for drinks, Portuguese people prefer good wine to eggnog or anything else. Usually, the Portuguese celebrate Christmas with immediate family members but often go out on the city streets afterward.