At What Age Do You Tell Your Child About Santa? 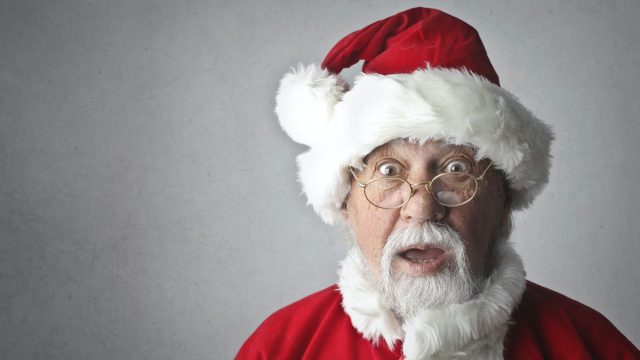 Some children seem to catch on quickly, while others reach the double digits in age and still believe.

So you might wonder at what age do you finally tell your children about the Santa Claus truth.

Some children seem to catch on quickly, while others reach the double digits in age and still believe. So you might wonder at what age do you finally tell your children about the Santa Claus truth.

Santa Claus is a huge part of our lives and an essential part of our Christmas cheer, so the thought of breaking hearts by telling your child Santa isn’t real will weigh heavily on our conscience.

A child is often influenced by what they see and experience around them, and their emotions can be affected by their family, friends, and classmates.

Children are constantly growing and learning new things and are easily susceptible to trauma. Something that can seem as trivial as the reality of Santa Claus can shake their whole world, causing negative side effects for their development.

As a result, the timing you tell your child about Santa, or when they discover the truth, is imperative to their development.

While tales of gift-givers and Saint Nicholas are very much real, the truth of the jolly Santa Claus might shock some young ones who aren’t ready for it yet.

Questions are very common with children as they are absorbing vast amounts of information every day. However, having been raised and told that Santa is real and is a fact, it is rare for them to question it until they reach around the age of 6 or 7, which is the “Santa is not real” age.

By this point, the child has started to form their critical thinking and take information from what they know around them and piece it together to form a conclusion. For example, they may have already decided that Santa is not real.

It’s essential to pay attention to how your child is starting to word the question. For example, if he asks a simple “Is Santa Claus real?” question, a simple yes should suffice. Although it can be challenging to find a response to “Is Santa Real,” follow your gut and respond with your best thought in mind.

Should the questioning stop at that conclusion, then it’s safe to assume the kid isn’t ready for another answer.

Things start to get a little complicated once the format of the question changes. For example, questions like “Santa isn’t real, is he?” or “Be honest, Santa isn’t actually real?” can be redirected towards the child.

Answer their more direct questions with “What makes you think that?” to allow their critical thinking. Often they will decide on their own, and your influence isn’t required unless it’s to push them in the right direction.

As parents, we were the ones who created the illusion of Santa Claus, so we think, “when should I tell my child about Santa Claus.” The Christmas magic brought cheer to the holidays and the cold winters and allowed us to spoil our children to no end.

Santa Claus and his story are our responsibility. As parents who created him for our family, it’s our job to allow our kids to have the correct answers once they begin to look for them.

The way you handle the situation can decide how your family will proceed with the story of Santa in the future. Maybe new traditions around gift-giving and leaving our cookies will be formed, leaving Santa more as a life lesson on sharing cheer.

Whether it be continuing to have Santa Claus in the household or leaving him behind altogether is up to our children. How you answer them and treat their curiosity is up to you, influencing the impression they are left with afterward.

As much as you might try to keep the secret safe at home, children still spend much of their time in the classroom.

Being exposed to older kids who already know the secret and who aren’t afraid to share is one possible way your child might find out.

Teachers also try to be very supportive and festive around the holidays, but conversing adults can let things slip when they don’t know that young ears are listening.

Creating decorations and participating in fun activities during Christmas is essential to kids, so do not refuse to let them participate in activities to protect them from things they might hear.

Just be prepared for the magic to die sooner than you expected, as your young tot might come home from class and demand why you have kept this secret from them for so long.

Friendship among children is essential to their development, especially if they do not have any siblings. Having friends allows kids to learn how to share and respect someone else’s boundaries and how to be kind.

As a result, some children might form friendships that are more powerful than a typical sibling relationship. In this case, a child might take whatever their friend says at face value and listen to them exclusively.

In some cases, your child might hear the truth from their friend. In this circumstance, do not deny it because you will create doubt in the child’s eyes, and they will lose trust in both their friend and yourself, as they won’t know whose telling the truth.

The Age of Confliction

The average age for children to stop believing in Santa is between the ages of 6 and 10. They start to question the existence of Santa Claus, and they might have a different reaction depending on their age.

Some parents might believe there is an age limit for Santa, but that is not the case. The younger end of the spectrum might not have even been ready yet and had heard the topic mentioned by someone else in passing.

These children might be in denial, as they don’t want to stop believing yet. So, if they are still eager to hear that Santa is real, there is no need to confirm their fears right away. Instead, let them keep the magic.

Those on the older side of the age bracket might begin to feel self-conscious. Although sad about learning that a childhood story is no longer true, they might be embarrassed that they had not discovered it earlier.

How To Answer Them

How you respond to your child’s questions can determine how they ask you questions in the future, and affect their level of trust in you. It can be challenging to find a “Santa is not real” explanation.

Some may even write a “Santa is not real” letter to ease the conversation or avoid it entirely. However, this letter is not recommended, as it can result in your child not wanting to talk to you about challenging topics when they’re older.

You mustn’t try and garner a specific reaction from your children when you break the news during the “Santa is not real” conversation. For example, do not tell them to stop crying, and do not tell them not to be sad.

Imposing emotions on your child will not give them confidence in having a safe environment to express themselves. Instead, be sure to let them react to the news as they would like and ensure them that they have your support.

The Spirit of Santa

Please encourage them to participate in the holiday spirit by taking on the roles that Santa had. By spreading holiday cheer and performing good deeds, they are continuing the legacy of Santa Claus.

Letting our children know that they are now old enough to be let in on the massive secret of Santa will let them feel proud and willing to participate in giving gifts and spreading kindness.

Don’t Spoil it For Others

Sometimes you might be in a situation where a child who is not your own will ask you the question. While we like to take responsibility for looking after children as adults, it is essential to take a moment to think about your answer.

If a child comes from a warm and cheerful home, it might not be your place to tell them the secret of Santa. It is often better to sidestep the question and let them figure it out on their own.

Letting a child receive the truth from their own family allows them to trust their parents that they will hear the truth when they are ready.

They Grow on Their Own

It is essential to know that although you might be ready for the questions your child will ask about Santa, there is a possibility they won’t ask at all.

Children are constantly exposed to outdoor factors that affect their growth, and in some cases, they might learn about Santa Claus from someone or something outside the family.

Some parents might find this alarming and would rather be the ones to tell their children themselves. However, it is essential to accept that your child will move on from Santa Claus when they are ready.

Forcing your child to remain ignorant about a holiday tradition simply so that you can tell them the truth when you are ready is selfish and hinders their growth. As parents, we must accept that not everything will change because of us.

Change is necessary for growth, and one day your child might come home with the story of Santa exposed. But, do not worry, as this is an excellent opportunity to still go over the story of Santa and his purpose-to deliver kindness and joy to the world during Christmas.