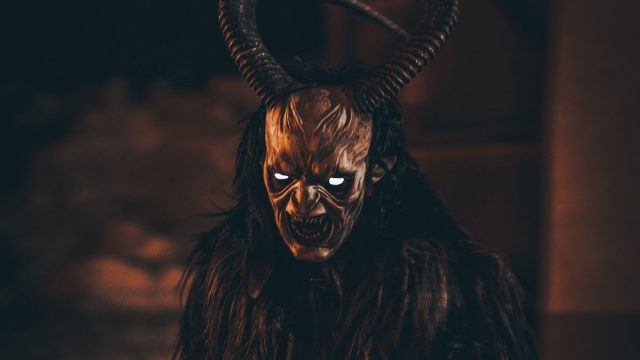 In the U.S, not many are familiar with the dark history of Santa Claus. Meanwhile, European kids know not everyone is receiving gifts on Christmas.

Some may receive whipping with birch rods, have their belly slit, or freeze to death instead.

Of course, good old Saint Nicholas doesn’t punish kids on his own. But he has multiple evil sidekicks taking care of children who don’t behave well, with the most popular one being Krampus.

Some of Santa’s dark helpers are even older than him, originating from pagan times.

They’ve managed to adapt to the changing times, perhaps, apart from Zwarte Piet – his figure raises the most controversy today.

People strive to find non-traditional ways to celebrate, participating in Krampus parades or honoring Belsnickel instead of Santa.

Krampus’s history stems from pre-Christian Alpine folklore, where he was typically described as an anthropomorphic, hairy brown or black goat with large horns and a long, pointed tongue.

While Krampus originates from Norse mythology, he shares some traits with demonic creatures from Greek mythology, particularly satyrs and fawns.

According to legends, Krampus carries chains that he trashes for added dramatism. Sometimes, the chains feature bells for an even louder effect.

Some scholars state chains symbolize the binding of the devil by the church, but that’s questionable since Krampus originated long before Christianity.

Krampus name is derived from German for claw – “krampen.” Alpine pagans believed he was the son of the Norse underworld god Hel.

Initially, Krampus was involved in pagan winter solstice celebrations, but, like many other traditions, he was later adopted by Christians.

Nowadays, December 5 in Germany, Austria, and some other European countries is celebrated as Krampus night.

Kids believe that Saint Nicholas, together with Krampus, visits houses to give gifts to the good children and punish the bad, whipping them with birch rods.

Often, parents dress up as Krampus themselves to frighten the children and motivate them to behave well in the upcoming year. This may seem cruel to people in the U.S., but hey, if it works, it works.

In some Austrian and German towns, grown men participate in the Krampuslauf or Krampus run.

They dress up as demons and roam the streets, making noises, with the primary intention to scare kids, but also to get drunk and have some fun.

Of course, such a controversial figure had to raise some criticism. Krampus always seemed too scary to some parents, while the church wasn’t fond of his pagan roots.

In the 12th century, the Catholic church in Germany and Austria attempted to ban Krampus night celebrations entirely due to his resemblance to the devil.

As you may have guessed, the attempt wasn’t successful, and it repeated once again in the 1930s.

A new wave of criticism arose in the 21st century – many are concerned that refugees in German and Austrian towns may find the tradition frightening. It’s hard to blame them – you should grow up with Krampus to take him calmly.

Surprisingly, Krampus popularity has only surged in recent years. He can’t compete with Santa or Mrs. Claus yet, but the rising number of movies and games dedicated to this demonic figure indicates growing public interest.

For instance, Krampus stars in the 2015 movie Krampus by Universal Pictures, the 2013 Christmas special of American Dad, and the 2014 video game The Binding of Isaac: Rebirth.

That’s only a small portion of all Krampus appearances in the popular culture of the 21st century.

Krampus isn’t alone in uncovering the dark and twisted side of Christmas. In Switzerland, Belgium, Austria, Germany, and some other European regions, people believe in another Santa’s evil sidekick – Frau Perchta or Bertha.

Like Krampus, Perchta originates from Alpine folklore. Scholars associate her with supreme Germanic goddess Holda and state that her name is derived from Old German “beraht,” meaning “the bright one.”

Despite the merry and bright origin of Perchta’s name, her appearance is rather grim and scary.

She’s described as an elderly woman dressed in rags with one large foot. Often, she has a crocodile’s or crone’s head or a wrinkled face with a long hooked nose.

If that doesn’t seem scary enough, Perchta carries a knife under her rags. In the early days, she was said to roam the night sky during the Great Hunt and during the Twelve Days of Christmas when Christianity took over paganism.

Perchta is not dangerous to grown men, but kids should behave well to avoid encountering her. If they don’t, Perchta would slit their bellies open with her knife and remove their stomach and guts.

Afterward, she would stuff the hole with straws and pebbles (Krampus’ whipping with birch rods isn’t all that bad, huh?).

Women should be aware of Perchta, too. Despite wearing rags, she loves a clean home. If Perchta notices a messy house, she’s believed to set it on fire.

Perchta is sometimes accompanied by Perchten, her evil demonic helpers. She never comes along with Saint Nicholas, preferring to work on her own.

Perchta can also take her beautiful and kind form when needed – she’s a goddess, after all. However, I wouldn’t believe her knowing the legends, no matter the looks.

Read more about Santa Claus: Who Invented Santa Claus, Where Does Santa Live, Who Is Santa Claus Wife, Secret Santa, and Saint Nicholas.

Zwarte Piet is Santa’s dark sidekick from the Netherlands that may be found extremely offensive today. But the Dutch consider it rather innocent, so the tradition persists.

Zwarte Piet translates as Black Pete, and you could already see where it’s going.

He’s the helper of Sinterklaas, traditionally portrayed by a white man covered in black color and wearing a curly wig. In other words, it’s a proper blackface.

Zwarte Piet’s figure originated back in colonial times and was initially known as Santa’s servant.

In the 19th century, Zwarte Piet used to punish badly-behaving children, rattling chains and threatening them with his rod – but never actually using it.

Today, however, Zwarte Piet causes no harm to anyone – his duty is to distribute candies to children.

But while Zwarte Piet’s personality in modern times is jolly and cheerful, his history is linked with slavery and is thus pretty gruesome.

It’s no wonder that today, Zwarte Piet’s figure causes major debates in the Netherlands. Traditionalists argue that he’s more of a noble servant, and the black makeup is an honor to traditions.

The opposing side justifiable notes that times have changed, and Zwarte Piet may reinforce negative stereotypes and remind of a dark page in human history.

Belsnickel is yet another figure from Germanic folklore. Unlike Krampus or Perchta, he visits children alone, not accompanied by Sant Nicholas.

Furthermore, he combines the evil and the kind traits, carrying a rod for the naughty children and sweets in his pocket for the good ones.

Belsnickel is described as a man in rags with a mask and a long pointed tongue, resembling both Krampus and Frau Perchta at the same time. Belsnickel’s name is derived from German for fur, “bels,” and “nickel,” referring to Saint Nicholas.

In the early 19th century, Dutch immigrants brought the legend of Belsnickel to Philadelphia, where he became a regional favorite. However, his popularity vanished after the 1930s Santa’s figure commercialization.

Belsnickel wasn’t forgotten entirely, though. In the “Dwight Christmas” episode of The Office, one of the characters dresses up as Belsnickel, and in The Christmas Chronicles 2, the figure appears in a renewed fashionable look.

Grandfather Frost, originally known as Ded Moroz, is the Russian version of Santa Claus. But unlike American Santa, who’s always jolly and cheerful, Ded Moroz can also be strict and even cruel.

Grandfather Frost became particularly popular in the 20th century but has roots in Slavic mythology. He’s a winter wizard who often appears in Russian folk fairytales, such as Morozko (roughly translating as Frostie).

In Morozko, there was a woman who had a daughter and a stepdaughter.

One day, she ordered her husband to take the stepdaughter to the woods and leave her there to die from cold (the evil stepmom narrative we’re all familiar with from Cinderella).

The husband obliged, and the girl was left in the winter forest all alone. She then encountered Grandfather Frost, who gave her a chest with fine garments and treasures for being polite and kind to him.

When the girl’s father came to take her body to be buried, he found out she’s alive and brought her back home, dressed in new beautiful clothes and happy.

The stepmom then sent her own daughter to the forest to also get Grandfather Frost’s gifts.

However, her daughter complained about the cold and was rude to Morozko, demanding treasures. He then froze her to death as a punishment.

This fairytale is the perfect depiction of Grandfather Frost’s dual nature. It was later adapted by Brothers Grimm, where the polite girl was coated with gold coins and the rude daughter with cement, flour, and pitch.