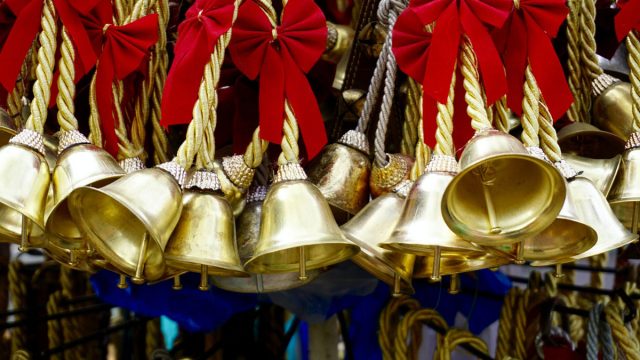 Initially, the song had a different name, rebellious meaning, and more verses.

Nowadays, the Christmas atmosphere is unimaginable without Jingle Bells. Every kid knows the lyrics, and all shopping malls play it on repeat throughout the holiday season.

However, Jingle Bells would never have become a Christmas staple if not for a legendary American singer of the 20th century who decided to cover it.

The song’s lyrics were considered controversial when it was written and raise debates to this day, but Jingle Bells remains an all-time favorite holiday track of many people worldwide.

A day or two ago
I thought I’d take a ride
And soon, Miss Fanny Bright
Was seated by my side
The horse was lean and lank
Misfortune seemed his lot
He got into a drifted bank
And then we got upsot

Now the ground is white
Go it while you’re young
Take the girls tonight
And sing this sleighing song
Just get a bobtailed bay
Two forty as his speed
Hitch him to an open sleigh
And crack, you’ll take the lead

Jingle Bells was composed by James Lord Pierpont in 1850 and published under the name One Horse Open Sleigh in 1857, repeating a famous line from the carol. The song’s name was changed two years later, in 1859.

Pierpont was born in Massachusetts in 1822 in a family with six children. Although his father was a pastor and a family man, James Pierpont didn’t follow in his footsteps and left his wife and three kids.

However, James Pierpont inherited his father’s talent for music and poetry.

In the late 1840s, during California’s Gold Rush, he worked as a photographer in San Francisco, but after his business burned down, he moved to Savannah, Georgia.

In Savannah, James Pierpont became an organist and music director of a local church. At this point, James Pierpont began writing music, so Jingle Bells, at that time known as One Horse Open Sleigh, was one of his first songs.

In its original version, Jingle Bells had four verses rather than one as it’s sung nowadays. And although today, Jingle Bells is an all-time Christmas classic, none of the verses mention Christmas.

That’s right – Jingle Bells was never intended to be a holiday song. Technically, it was a holiday song, but Pierpont wrote it for Thanksgiving rather than Christmas.

Despite Pierpont writing the song for Thanksgiving, it doesn’t embed the virtues of the holiday – gratefulness, consciousness, and love for family.

Instead, it describes a fun Massachusetts tradition of annual sleigh races at the end of November.

In the first verse of the original Jingle Bells version, the sleigh dashes through the snow, with bells ringing and the driver laughing all the way – that’s the widely known verse of the song.

But in the second verse, the driver takes a ride with his girl and loses control of the sleigh. In the next verse, his sleigh crashes, and his rival laughs at him.

In the last verse, the driver, recalling his negative experience, advises his friend to find a faster horse, pick up some girls, and drive at full speed to take the lead.

However, as time went by and the song gained popularity, it was shortened to only one verse and a chorus, as we know it today. The modern version of the lyrics doesn’t mention the sleigh crash, girls, or the driver’s advice.

Jingle Bells’ short version was first recorded in 1889 on an Edison cylinder, the earliest commercial tool for recording and reproducing music. Unfortunately, this record no longer exists, but the second recording from 1898 can still be found online.

In a small town of Medford, Massachusetts, one can find a plaque indicating a place where once stood a tavern where James Pierpont composed Jingle Bells.

The plaque even mentions the names of witnesses who verified the fact that songwriting took place in that particular tavern.

Town authorities of Savannah later installed a historical marker near the church where James Pierpont worked as an organist.

James Pierpont never found out about the success of his song. He died in April 1893, decades before his creation became one of the best-recognized songs worldwide.

Perhaps, Jingle Bells didn’t become popular in the 19th century because of its rebellious message. The lyrics were a bit progressive for that time, which is ironic considering that Pierpont’s father and brother served the church.

But if Jingle Bells wasn’t intended to be associated with winter holidays, how did it get to the top of the most popular Christmas song list?

Until the 1940s, Jingle Bells was popular locally, but everything changed with Bing Crosby’s and the Andrews Sisters’ 1943 recording, which reached the top-20 charts.

By that time, Bing Crosby was already a famous singer in the U.S. In 1931, ten of the top 50 America’s most popular songs were performed by Bing Crosby, and in 1948, he was declared the most admired man alive by American polls.

But the song was released around Christmas time, which, combined with the wintery imagery of the lyrics, made Jingle Bells a holiday staple.

Bing Crosby was also known as a singer of other Christmas hits, including White Christmas, Silent Night, and Twelve Days of Christmas. He had multiple Christmas albums, so Jingle Bells was bound to become a festive icon.

The song’s shortened version indeed draws associations with Santa’s sleigh, although his sleigh was pulled by eight reindeer rather than one horse. Furthermore, the lyrics mention bright spirits, songs, and laughter, creating merry, festive imagery.

Here’s a fun fact – Jingle Bells was broadcast from space in 1965 in a Christmas-themed prank by Gemini 6 astronaut crew. So, it’s not only one of the most famous songs in the world, but also one of the first songs heard in space.

Bing Crosby’s Jingle Bells cover wasn’t the only notable version of the song, though.

In 1951, Les Paul hit the top-ten chart with his guitar version of Jingle Bells, and in 2006, Kimberley Locke’s version ranked first on the Billboard Adult Contemporary chart.

According to Billboard, Barbara Streisand’s 1967 Jingle Bells cover is a “bizarre, hectic, and fast-paced version of the original song,” yet one of the best Jingle Bells recordings of all time.

In 1990, Dolly Parton put a country-pop twist to the song, and in 2009, Straight No Chaser created a Capella cover of Jingle Bells.

Jingle Bells is undoubtedly one of the most covered songs globally, so if you’ve only heard Bing Crosby’s version, check out other recordings – some may surprise you.

Most popular Christmas songs convey a profound message, teaching us the importance of family, generosity, kindness, and faith – O Come Ye Faithful, Driving Home for Christmas, and Silent Night, to name a few.

Jingle Bells is different, though, because James Pierpont never thought of Christmas when writing it. Still, the lyrics match the Christmas atmosphere surprisingly well, embracing the festive spirit.

Some sources even suggest that the song is racist, pointing out the author’s support of the Confederacy and drawing links between bells and slavery.

The song’s original lyrics are a bit risqué for a quiet family holiday that is Christmas, mentioning picking up girls and high-speed races, but it’s doubtful that Pierpont’s song has a racist meaning.

The original Jingle Bells lyrics include lines such as “go at it while you’re young” and “take the girls tonight,” which, given Pierpont’s rebellious nature, suggests that the song’s message was pretty down-to-earth and hedonistic.

Most likely, the author simply wanted to share a fun tradition from his home state with the public and advise people to enjoy life. In the context of Christmas, the song evokes imagery of lively celebrations and winter fun.

Many people unfamiliar with Jingle Bells’ initial meaning believe that the song is about Santa Claus riding his sleigh, and it’s easy to see why.

In the U.S., Santa’s sleigh is pulled by reindeer, but he often rides a sleigh drawn by a horse or a different local animal in other countries.

In support of Jingle Bells’ harmless narrative, some scholars suggest that Pierpont wrote the song only to earn money rather than incorporate any agenda into the lyrics.

The author wrote One Horse Open Sleigh right after returning from California, where his business burned down.

At that time, sleighing songs were a whole genre, and Pierpont may have chosen the topic to reach a wider audience and make a living.

Some sources even point out the striking similarities between Pierpont’s song and other popular sleighing songs of that time, suggesting that Jingle Bells became popular by chance and not because it was genuinely remarkable.

At the end of the day, everyone’s free to interpret the lyrics as they wish, but in its essence, Jingle Bells is a lighthearted, jolly song about winter sports, encouraging people to have fun.

Christmas is a religious holiday, but it doesn’t have to be solemn. Fun is integral to Christmas celebrations, creating the festive mood and warding off winter blues.